The groundwork for an athletic track for the East Berbice-Corentyne Region has reached its third phase with its completion set for mid-2019.

This move is in keeping with the Ministry of Social Cohesion’s (MOSC) promise to begin preliminary works before 2018 concludes. 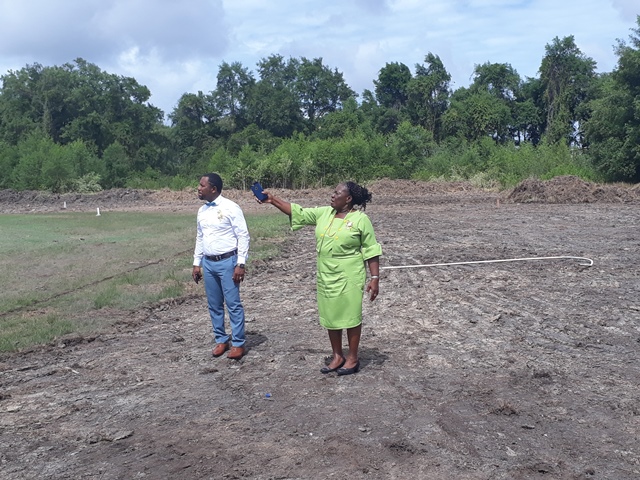 A hymac currently operating on the ground.

The 400-metre top-class facility is being constructed at the Burnham Park in New Amsterdam, a huge field located in close proximity to the Canje Bridge and is known for its sporting history.

Thus far, Phases One and Two were completed by German company BSW Regupol. This involved the evaluation of the site and completion of the design. Phase Three which will see land clearing, demarcation, laying of drainage pipes, inner and outer track works and asphalting, is currently being executed. The next step entails the laying of the synthetic track.

BK International has been awarded the $141M contract to continue this project and it is expected to be finished by mid next year.

According to Assistant Director of Sports Melissa Dow-Richardson, once completed, the track will be 400M in length and outfitted with eight-lanes. It will also have all the facilities to host international track and field events and a full-size football field will be constructed in its interior.

A similar project is being undertaken in Linden Region 10 at the Bayroc Community Centre. This contract has been awarded to Builders Hardware General Store.