Recognising the importance of resolving land rights issues, President David Granger, today, established a Commission of Inquiry (COI) to examine and make recommendations to resolve issues and uncertainties surrounding the individual, joint or communal ownership of lands, along with Amerindian land titling issues..

Rev. George Chuck-A-Sang has been appointed to Head the Commission, which includes Mr. David James, Mrs. Carol Khan-James, Professor Rudolph James, Mr. Lennox Caleb and Ms. Paulette Henry and Ms. Belinda Persaud.  The President, just after swearing in the Commissioners at a simple ceremony at State House, urged that they execute their duties with due diligence since land represents economic stability and cultural, material and even spiritual identity for some people.

“They have almost a sacred duty not only to the Indians and the Africans, for generations to come, to ensure that we go forward into the future without disputing what God has given us bountifully; the land of this great country. You have taken an oath. You have sworn to execute your functions without fear or favour, affection or ill will and I pray to God you will do that, not for yourselves not for the Government for our children and the people of this country,” President Granger said.

The President noted that the Government has recognised that the issues of land rights is far from settled and said he said that the establishment of this Commission is, therefore, intended to settle the various controversies, which may exist and to ensure that justice is served.

“We decided…to ensure that our people can live in this land of Guyana without worrying about their future, without worrying about the security of tenure. Land is a vital economic and social resource in this country and I am convinced; the Government is convinced that we have enough land to satisfy all the needs of our people and for generations to come. Regrettably, land has become a source of disagreement and discontent. There have been controversies. The establishment of the Lands Commission, therefore, is meant to settle these controversies and to satisfy all of the citizens of our country that we need not fight each other for land, that we will investigate their claims and we will respond to their just demands,” the Head of State said.

Referencing the Indigenous population, the President said that they can now be their land rights issues will be examined and dealt with in a fair and just manner.

“The indigenous peoples of course, who have been here from time immemorial, have strong cultural, material and even spiritual connections with their land. It is a sine qua non (essential) for their existence,” he said.

Meanwhile, Mr. Lennox Caleb, in an invited comment, agreed that the land titling is an conflictual issue but said that the setting up of the Commission can result in the resolution of these historical matters. “This will give us a new perspective surrounding land titling. Like the President said, there are so many conflict issues that have been steeped in history and this is perhaps an opportunity to bring an inquiry and resolution to the many issues and I see my role as bringing a different perspective,” he said.

As has been provided for by the Laws of Guyana, the President may issue a Commission appointing one or more commissioners and authorising such commissioner or commissioners to inquire into any matter, which in his opinion, an inquiry would be in the interest of the public.

Consequently, in the exercise of the powers conferred upon him by Section 2 of the COI Act Chapter 19:03 in the laws of Guyana, the President will appoint the following persons to service on the Lands Commission of Inquiry. 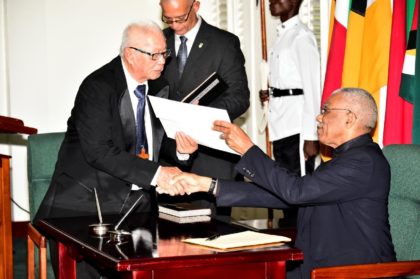 Chairman of the Lands Commission of Inquiry, Rev. George Chuck-A-Sang receiving his instrument of appointment from President David Granger 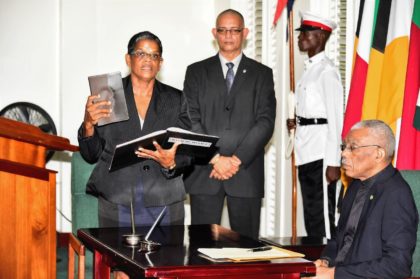 Ms. Carol Khan-James taking her Oath of Office in the presence of President David Granger 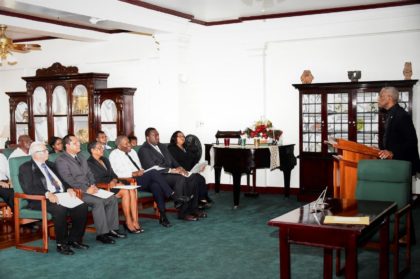 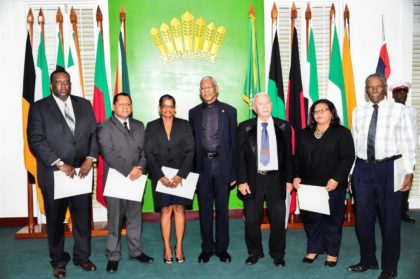