The Hague Conference on Private International Law which will be held in Guyana from July 13 to 15 is seen as very important for this country. Its Secretary General, Dr. Christophe Bernasconi is hopeful that the specific outcome of the conference will be Guyana becoming a member of the body. 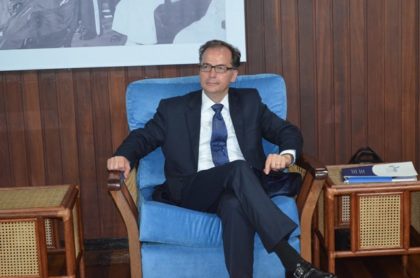 This will see Guyana benefitting from assistance for technical support which translates into real impact on Guyanese and commercial operations in cross – border deals.

Dr. Bernasconi, speaking with media operatives today, after meeting with President David Granger explained that, “This is with no doubt the most important in terms of the quality of attendees coming. We have more than 200 experts from the Caribbean region coming from more than 20 different states so we are delighted to be here. (We are) most grateful for the president’s personal support and involvement.”

The Hague Conference on Private International Law is an International Non-Governmental Organisation that has developed a wide range of treaties and conventions regarding family law and the cross-border protection of children.

“You haven’t protected a single child by just signing up to the convention, you need a machinery to actually enforce it, and this is where the Hague child protection conventions come into play, and we are delighted to be here for this regional meeting,” the Secretary General outlined.

The upcoming meeting is the third of its kind for the Caribbean region, with the first being held in Bermuda and the second in Trinidad and Tobago.

Further the Hague Conference comprises 81 members including the European Union along with 60 states that are party to at least one of the conventions.

“First…Guyana would then be invited to all our meetings, have a voice around the table and participate actively in negotiation of new treaties, but Guyana would also have a priority access to technical assistance which might be important for the implementation of some of these conventions which might be a bit technical as this cross-border stuff can be difficult… being a member comes with its important advantage that you can rely on a priority basis on our technical assistance,” Dr. Bernasconi explained.

He added that when Guyana becomes a full member, it will be amongst the very first states in the region to do so along with Suriname, as other Caribbean States are only connected by being a party to a convention.

Attorney General and Minister of Legal, Affairs Basil Williams in an invited comment explained that an opening session will be held Wednesday evening and would be declared open by President Granger.

“The issues deal, on the first day, with child protection, child abduction, child adoption, child maintenance and custody…the law that would determine which country would be seized in terms of determining the questions – whether it was Guyana, the cross- border country, America, Canada or Brazil, Venezuela,” Minister Williams explained.

The Attorney General added that the conventions relating to commerce, legal cooperation, cross – border trade, and human rights among other things will be dealt with on the second day of the conference.

“These conventions largely impact the Guyanese people in a positive way, the business community also because, once you sign on to the conventions, for example the World Bank would rate you higher as a place to do business, and there are different aspects of those conventions that would facilitate easy trading between countries, legal certainty and protection of our investment…the choice of court and choice of law in the case of any disputes,” Minister Williams explained.

This means that the Bar Association, Private Sector, and Non-Governmental Organisations which deal with children will be involved in the upcoming conference.

Additional participation will be seen from Attorneys General and Ministers of Justice from within the Caribbean Community (CARICOM) and Judges including Caribbean Court of Justice President, Sir Charles Michael Dennis Byron. The Organisation of Eastern Caribbean States (OECS) has nominated two judges to participate, which will complement the participation of judges from Jamaica, Trinidad and Tobago, Haiti and Suriname.

“Almost immediately upon the closure of the conference, the president has already indicated that he definitely will want to be a member and take the benefits of capacity building and signing on to conventions and other technical assistance… so we will work in collaboration with the Ministry of Foreign Affairs in that regard,” Minister Williams said.