After waiting for decades, the road to Linden from the Soesdyke junction is now being made visible for night time travel with energy-efficient LED lights. This groundbreaking development has caught the eyes of many living along the highway.

Small business owner Sharon Holder who resides in Kuru Kururu, where the first set of lights were placed, noted her satisfaction with the recent project. 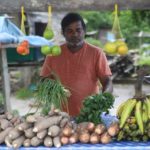 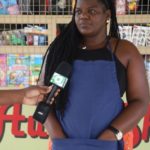 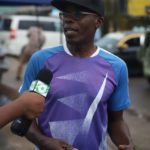 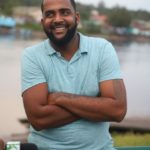 “Since I come on the Linden Highway, it’s about 18-19 years now and I always know it without light […] So, it’s a good thing for me and all the residents in the area,” the businesswoman told DPI.

Christian Mootilall, one of the fruit vendors within the same vicinity, also commended the lighting project that illuminates the Kuru Kururu portion of the highway. Speaking to DPI, Mootilall said the project is “a very good one” and expressed his desire to see the entire highway outfitted with lights.

Further along the highway in Linden, taxi driver Ron Higgins who has been plying the Linden-Georgetown route for more than 10 years said the lights enable road safety.

An emotional Higgins remarked, “there are a lot of accidents that happen, drivers knock down people and drive away and all these things. So, with the lights now, you would have a better chance to see people [using the road].”

Another taxi driver, Vandyke Orna, who prides himself as being one of the most seasoned drivers with approximately 28 years’ experience on the highway observed that the lights will both ease discomfort and enhance business.

According to Vandyke, “when there weren’t any lights, I used to work but I had to focus more. So, now the light is there, it’s not going to put me a lot under of pressure to observe what’s in the corner or in my way.”

Under the Public Infrastructure Ministry, lights are being installed along the densely populated areas of the highway. Some of these areas include Kuru Kururu and Bamia. During the rehabilitation of the highway, the entire length from Soesdyke to Linden will be outfitted with lights.