The Ministry of Legal Affairs in partnership with the Hague Conference on Private International Law (HCCH) and UNICEF Guyana will be hosting a one-day meeting on September 28, 2017, at the Pegasus Hotel.

The meeting will engage key stakeholders to determine which conventions should be prioritised for ratification based on conclusions and recommendations emanating from the 2016 Hague conference. These include the Child Protection Convention, Apostille, Choice of Court and Maintenance. 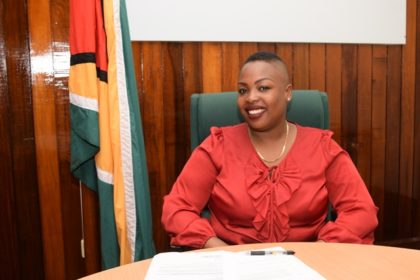 Parliamentary Counsel, Diane Woolford said, “The aim of this meeting is to have the key stakeholders ventilate ideas so that we can protect Guyana’s children, and to ensure that the conventions will be implemented so that the nation’s children will ultimately benefit from this meeting”.

The forum will be spearheaded by Attorney General and Senior Counsel, Basil Williams.

“We intend to start early, so invite stakeholders to come out, be prepared to give ideas, be prepared to share ideas and recommendations so that it will be productive”, Woolford instructed.

Key representatives from the Government and the Civil Society are expected to attend.

The expected outcomes of the meeting are priority conventions identified for the State’s consideration and key initiatives/partners identified to support follow-up on the conference recommendations.

In 2016, one hundred and eighteen (118) participants from twenty-five (25) states and overseas territories, including Attorneys General and Ministers of Justice, Chief Justices, Judges, representatives from Foreign Affairs Ministries, Child Protection Authorities, the Caribbean Court of Justice, among others, met in Georgetown to discuss the work of the HCCH, and the relevance of some of its core conventions and instruments to Guyana and the wider Caribbean region.

According to a concept note, the meeting was jointly organised by the Legal Affairs Ministry and the Attorney General’s Chambers of Guyana, UNICEF Guyana, and the HCCH. The meeting built on conclusions and recommendations adopted by the first Caribbean seminar that took place in Bermuda in May 2012, and the second meeting held in Trinidad and Tobago in June 2015.

One of the outcomes was the new designations to the International Hague Network of Judges that were announced by the Cooperative Republic of Guyana.

The meeting also provided an opportunity for the country to reflect on how to improve domestic and international legal architectures for children, especially as it related to issues on international adoption, abduction and Child Protection.