Leguan, Region Three residents, for the first time, are benefitting from asphaltic roads. 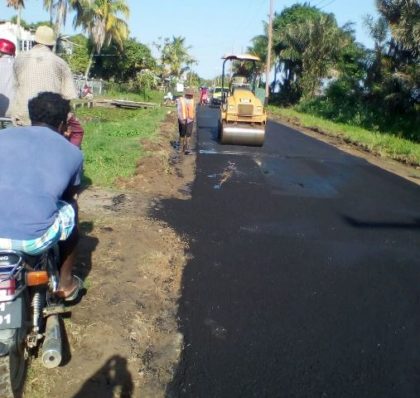 “I have my mobile asphalt plant up there, and a full team of workers, and we should be completed within a week or two. We’re doing as much as possible hopefully, the entire Leguan…” the Minister explained.

Meanwhile, Minister within the Ministry of Public Infrastructure, Annette Ferguson told the Government Information Agency (GINA) that despite the many challenges experienced, work is moving apace on the roads. Minister Ferguson said that during the execution of works, the mobile asphalt plant had stopped generating asphalt for a few days, disrupting the pace of work.

“… we were able to have that rectified, so it’s currently up and running and the team from the Special Projects Unit within the Ministry of Public Infrastructure, is continuing all the necessary works,” Minister Ferguson said.

Minister Patterson expressed pleasure that his ministry is bringing relief to the residents of the agricultural community.

The Ministry of Public Infrastructure has been constructing, rehabilitating, and maintaining roads and bridges in Regions 1 to 6 and 10.

In the 2015 budget, $509M and $570M were awarded under the miscellaneous and urban roads programmes, respectively.  All works are expected to be completed in the second half of 2016.