(Georgetown, June 8, 2017) – With the ultimately objective to whetting the appetite, eliciting respect and appreciation while encouraging more scholarship on Indo-Guyanese and by extension Guyanese Literature, yet another book is ready to hit the local shelves. 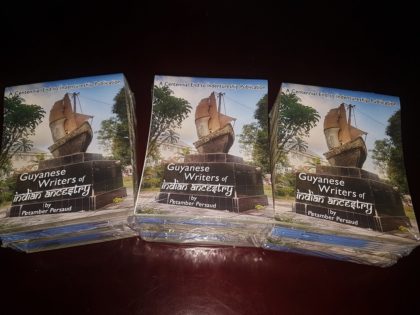 As Guyana continues to observe the centennial anniversary of the end of East Indian indenturship on its shores on Thursday Literary Activist/ Writer and Oral Historian Petamber Persaud handed over 100 copies of a pocket book titled Guyanese writers of Indian ancestry to Hon. Nicolette Henry.

Expressing gratitude during the presentation in her Secretariat, Minister Henry noted the importance of such publications to the Guyanese fabric on the road to social cohesion through literary and cultural awareness. “I’m sure that it will evoke nostalgia for some and adventure for others” Minister Henry said.

This is the second in a series of pocketbooks produced by Persaud following the launch of ‘Made in Guyana’ which was written for Guyana’s Golden Jubilee celebrations. “This 50 page book is a tribute to our literary ancestors dating back to the early 19th centuary capturing information about writers up to present day,” Persaud said.

In his opinion there is not much information readily available on Indo-Guyanese Literature and this project is an attempt fill that lacuna. He also noted that he was motivated to pen the publication as there are many writers who are not know or little know thus to showcase alongside more recognised writers.

It is hoped that these book will be educative and informative to students and anyone who cares about our literary patrimony/heritage. It is presently available for sale at Austin’s Book store and will soon be available at hotels and all ports of entry. 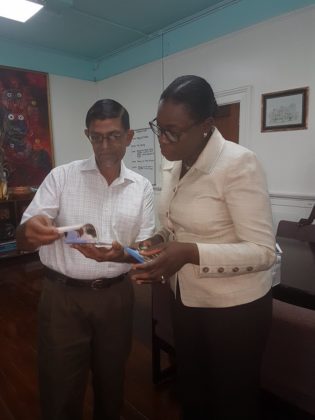