Local agencies to be trained by Brazilian Engineering and Construction Batallion

─ “Until all the participants would have completed 384 hours of training then they will be given a certificate. So, it’s a very rigorous training and a serious operation” – Lt. Col. Craig

A team of 48 military personnel from neighbouring Brazil was received and officially welcomed by Minister of State, Joseph Harmon on Monday in Lethem. The team will be drilling eight wells in eight South Rupunini communities, in a joint project with the Guyana Defence Force (GDF) and other local stakeholders, to provide water security to the villages during the dry season.

The military team will also host three-days of training for members of the Guyana Defence Force (GDF), Guyana Water Incorporated (GWI) and Hydro-meteorological services, to familiarize them to the methodology of drilling in preparation for them to work side by side with the Brazilian Military team. 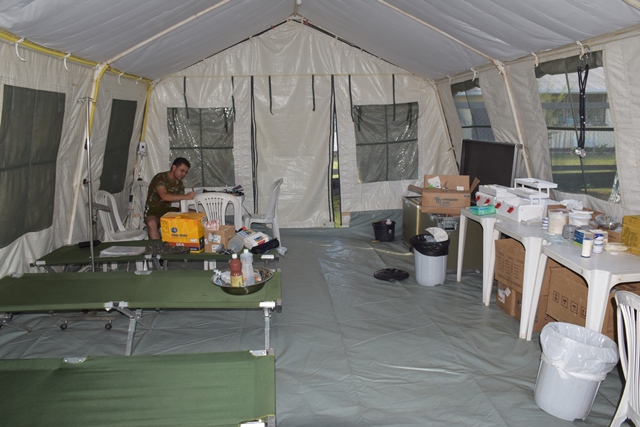 Brazilian Army Health Post set up at the base in Aishalton. 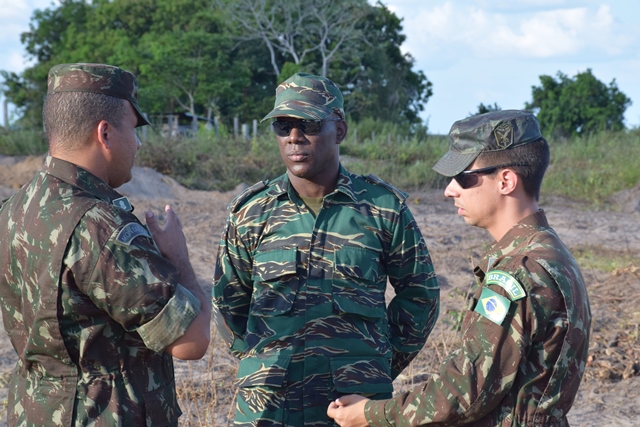 The Brazilian Army trucks that will be used for drilling of the wells.

“The whole aim of this operation is to have knowledge transfer. So, they will do theory followed by supervised practical; then they will be required to drill two Wells by themselves. Until all the participants would have completed 384 hours of training then they will be given a certificate. So, it’s a very rigorous training and a serious operation,” Craig explained.

The Brazilian Army Engineering and Construction Battalion (BEC) arrived in Guyana on Monday, October 1. The team is putting the final arrangements in place to commence drilling on October 4th.

Director General (ag) of the Civil Defence Commission (CDC), Lieutenant Colonel, Kester Craig told the Department of Public Information (DPI) that the team will begin drilling at Aishalton and Karaudarnau then move to the other areas.

The project is a collaboration among 15 agencies and aims to bring relief to the named hinterland communities while the Brazilian engineers transfer knowledge to their Guyanese counterparts.

Among the beneficiaries are personnel from the Guyana Police Force (GPF), Customs and Immigration, Ministries of Public Health and Public Infrastructure.

“I must commend the Ministry of Public Infrastructure for the collaboration with the contractors and GDF to ensure that access to this location was very smooth. The Brazilian team enjoyed the journey,” Craig stated.

They will be handed over to the Government of Guyana on November 28.