The year 2017 saw the largest number of ranks in the Guyana Police Force (GPF) benefiting from both local and international training. This was disclosed by Acting Police Commissioner, David Ramnarine at a press conference today.

“Some 339 officers and other ranks (Constable to Assistant Commissioner) were trained overseas in the last three years.  131 alone in the year 2017,” Acting Commissioner Ramnarine reported. 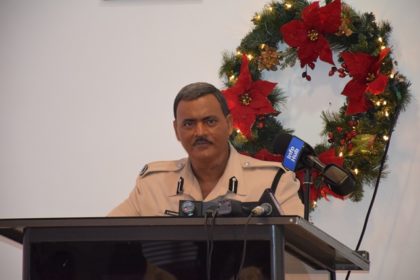 The Commissioner (ag.) further detailed that 271 officers and other ranks were trained by the Justice Society of Canada while noting that 80 percent were Civil Investigation Department (CID) Operatives. 175 officers and other ranks also benefited from training at the Nations University, and 55 immigration officers received Border Security training facilitated by the United Kingdom.  Also benefiting were 195 junior ranks who received Medical First Responders Training from the Project Dawn Clinic, Liliendaal.

The Acting Commissioner emphasised that in 2017, the GPF witnessed 794 recruitments, which is to date the largest number compared to previous years.  Ramnarine said “639 for the regular service, 155 for the special constabulary. And of the total amount, CID benefited from 125 alone.”

The Commissioner also highlighted that fire drills, first aid and security duty training were conducted with officers responsible for Parliamentary Security Detail. These, he explained, came as a result of threats made to various parliaments in other countries.

Acting Commissioner Ramnarine believes despite hiccups over the 2017 period, the GPF has performed satisfactorily in all its departments. He said, with growing demands from the public, the Force aims to do more in 2018.