As developmental and economic advancements continue to unfold in Guyana, the Coalition Government remains committed to small businesses and local manufacturing and the economic prospects they bring.

According to Finance Minister, Winston Jordan, who toured two East Bank Demerara manufacturing companies today, the government is dedicated to pushing local manufacturing and broadening the scope for producers. His visits to the companies today were to encourage the manufacturers and offer all possible support.

The first stop was at Demerara Bakery, located at Block G1, Land of Canaan. The company commenced operation back in 2014 with two bakers. Today, it has a staff of some 90 persons, from within and around the community. 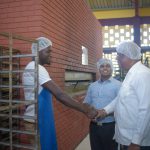 Minister of Finance, Winston Jordan greets one of the bakers at Demerara Bakery 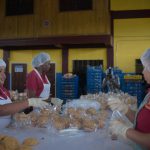 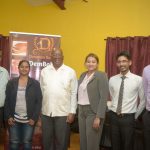 During a discourse with owner Peter Abai, Minister Jordan reiterated the administration’s support for small businesses.

“We have done our part to improve the environment for investment, and it is investments like these… I always emphasise the small and medium businesses because for me it is easier to establish, you employ more people, and they will stay around longer,” Minister Jordan said.

With the aim of becoming the premier bakery in Guyana, Demerara Bakery bakes between four and five thousand pieces of 26 different items, which are supplied to close to 700 customers across Guyana. These items range from tennis rolls to coconut buns to plait and sliced bread to salara and pastry products. The company is currently building a new factory behind the current business.

Abai said he is grateful for the support from the government and was particularly appreciative of the 25 per cent tax incentives offered to small businesses.

He said while it may be difficult to export items such as those produced, plans are in the pipeline to “set up shop” in other countries.

The Finance Minister’s second visit was to Tandy’s manufacturing at Eccles Industrial Site. The company, which has become a household name in Guyana, was established in 1989 and has seen an expansion over the years. 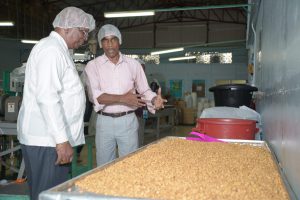 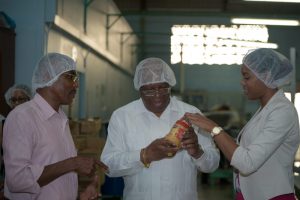 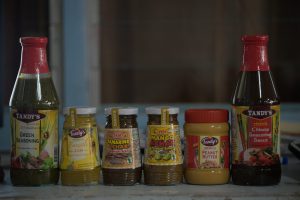 Outside of the few challenges experienced, the company has been doing exceptionally well.

Director Burt Denny said the company first started as a manufacturer of peanut butter; however, it later diversified. Along with peanut butter, the company now produces jams, mixed fruits for cakes, bottled seasoning and Chinese sauce among other things.

Minister Jordan said it would be good to see more exports from the company. So far, Tandy’s exports in small amounts of its products to Canada and the United States of America.

He added that while it is still a little challenging to export to some countries within the Caribbean, the Ministry of Foreign Affairs has been vigorous in its move to break the barriers in this regard.