The Central Housing and Planning Authority (CH&PA) will conduct weekly lotteries to select beneficiaries of its’ ‘Home Improvement Subsidies’. This promotion is expected to cost the agency a total of $15M.

The lottery promotion which will be conducted in nine of the ten Administrative Regions (excluding Region Eight), will see a total of 300 names being drawn from the shortlisted, eligible, beneficiaries who would have qualified for the CH&PA subsidy.

The winners will access up to $50,000 worth of building materials to effect repairs to their homes. A voucher system will be used for the distribution of the subsidy.

Minister within the Ministry of Communities, with responsibility for Housing, Valerie Sharpe-Patterson told the Government Information Agency (GINA.), that the vouchers are redeemable for the completion of home improvements such as concrete and timber works, doors, painting and the installation of kitchen cupboards . 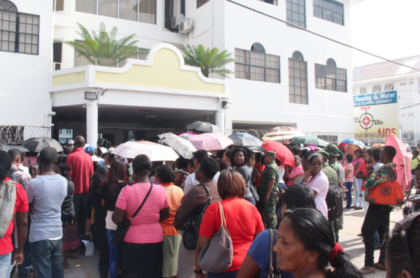 To be eligible, a beneficiary must be living in a low income home in an existing housing area or regularized squatter settlement developed by CH&PA. The person must have built and occupied their home, the Minister stressed .

Forms for the home improvement subsidies are available in the regions, the Minister advised. Interested persons are also advised that along with their application, they would be asked to submit documents  including copies of their National Identification card or passport, a proof of income, copy of land ownership or land allocation and proof of address.

The lotteries are expected to be held between the periods, October to November so that the beneficiaries would receive the vouchers and the work on their home will be completed in time for end of year holidays.

The CH&PA Home Improvement Subsidies was one of two promotions launched by the agency in celebration of Guyana’s 50th Independence Anniversary. The other promotion, the 50/50 (Jubilee) payment plan, was launched in February and ended early June. It allowed for persons who would have paid half the cost of their house lot by the end of April, to get a 50 percent discount on the balance and this had to be paid by June 2.

The Jubilee plan was a huge success, with the initiative benefitting over 2800 persons and earning the agency close to $600M.

The two promotions in addition to encouraging occupancy of the house lots, were also facilitated to improve the liquidity of CH&PA and to stimulate construction boom in the economy.