Minister of Social Cohesion, Dr. George Norton, today, charged teachers of Lusignan Primary School to find creative ways to lead the process of inclusion by demonstrating the virtues of respect and tolerance to their students. The Minister made these remarks during his address to the attendees of the Diversity Education and Inclusion Regional Training Workshop at the Lusignan Primary School, East Coast Demerara. The two-day workshop is one of 29 such events which have so far been hosted by the  Ministry in various parts of the country.

“If we want to be successful with our mission and vision, then we’ve got to involve teachers of our children from the lowest level. So all that we do we cannot forget the emphasis [that] we’re placing on our children; school children especially but youths in general,” he said.

Twenty-five teachers at the school, who hail from communities such as Bee Hive, Montrose, Annandale, Better Hope, Lusignan, Ann’s Grove and Non Pariel are participating in the Workshop. Minister Norton said that after parents, teachers are the most critical role models in a child’s life and he urged them to engage in the sessions, which have been designed to help them to identify hidden biases, which are barriers to inclusion, and to brainstorm ideas about how to erase inequalities. “Put every effort that you could [into] what our trainers will bring… Learn as much as possible. I want all of us to make full use of the opportunities that… have been presented to us,” he said.

Programme Coordinator at the Ministry of Social Cohesion, Ms. Sharon Patterson, while providing an overview of the Ministry’s mandate, said that social cohesion “is a process of nurturing individual and community relationships in order to build a unified Guyana”.

She also said that considering the vital role that teachers play in nation building, social cohesion cannot be glossed over. As such, the Ministry is currently preparing a civic education booklet that will help teachers “in the school system to help children to understand who they are as Guyanese and how they can contribute to working together; how they can contribute to cooperating with each other; how they can understand the culture and religion of their peers so that they can get along and not find themselves in the pitfalls that a few generations ahead of them found themselves in”.

Ms. Genevieve Allen, Chairman of the Regional Democratic Council,Demerara-Mahaica (Region Four) said that she was pleased that the Ministry was engaging with educators, as they are tasked with the responsibility of moulding the minds of the nation’s children. “When I think of social cohesion, I often interpret it as the gel or glue that will bring the diversity of the people of Guyana together, that will form this strong component that will take us out of the dogma of the past,” she said.  Ms. Allen also expressed the hope that the workshop will foster a change of heart and mind and purpose of the participants and a commitment that they would work together to ensure that the goals and objectives of the ministry are realised.

Several of the teachers said that they plan to share the knowledge that they gain from the workshop to help to instil sound values in their charges.

In an invited comment, Ms. Loretta dos Santos, Head Teacher (Ag) at the school, said that after having participated in a previous Diversity Education and Inclusion workshop, she wanted her teachers to be exposed to the topics discussed so that they too would have better insight into issues surrounding diversity and inclusion in Lusignan and the wider society.

“Too many times we would have focused on the academics and just putting aside the hidden curriculum where you have to teach certain morals, values and attitudes… We also have teachers here from diverse backgrounds… from various communities… and I think that this will have a rippling effect, whereby the teachers will [take the knowledge back] into their classrooms and the children will tell their parents and [share when] they go to church, or the mandir or the temple and this rippling effect goes on. I believe also that when this is done we would have a better society, a better country as a whole,” she said.

Ms. Deoranie Drepaul, a teacher at the school, said that the sessions have helped her to become more compassionate. “It has built my thinking and [made] me more conscious of what I do in making decisions and choices. Now as a teacher, we’re in contact with teachers and parents so [it would] help children to look at each other [as] not different… and with the parents, maybe we [can] help parents to see that we should teach our children not to hate…  but to see each other as individuals,” she said.

Ms. Bernadette Pierre, the Chairperson of the Parent Teachers’ Association at the school said that she is happy that she capitalised on the opportunity to attend the workshop. “Many of the sessions… I felt pointed to me because I was not conscious [of certain] things but now that I have been given certain guidelines I can better use it in my everyday life and share with others,” she said.

As the workshop continues, the participants will be engaged in sessions covering topics such as values, understanding prejudices, self-awareness, understanding diversity, trust building and nurturing communities, all aimed at advancing the social cohesion programme, within the context of implementing the National Strategic Plan on Social Cohesion 2017-2021. Trainers, Ms. Kala Seegopaul and Ms. Rishon Seebarran will lead the sessions, with assistance from Ministry of Social Cohesion, Technical Officer, Ms. Natasha Singh-Lewis.

The Ministry has hosted several Diversity Education and Inclusion workshops across the country. These sessions involve stakeholders from faith based and women’s groups, senior secondary school students, regional officers, members of civil society and community development officers. Since January, workshops have been held in Paramakatoi, Potaro-Siparuni Region Eight and at Aishalton, Upper Takutu-Upper Essequibo Region Nine, in Ann’s Grove and other areas. A workshop for youth was also held in collaboration with the Department of Culture, Youth and Sport of the Ministry of Education. 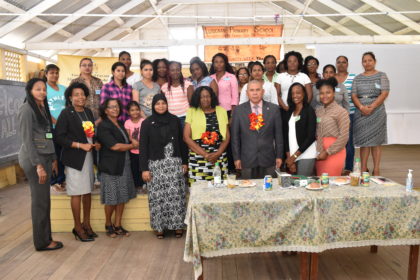 Minister of Social Cohesion, Dr. George Norton (third, from right) and the participants in the 29th Diversity Education and Inclusion Regional Training workshop, held at the Lusignan Primary School 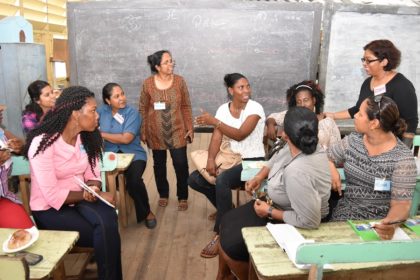 Trainer Ms. Rishon Seebarran (first right, back row) and some of the participants during the interactive component of the workshop 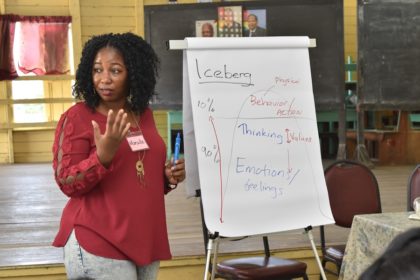 Ms. Marcelle Mordle, a participant in the 29th Diversity Education and Inclusion Regional Training workshop, during the interactive session 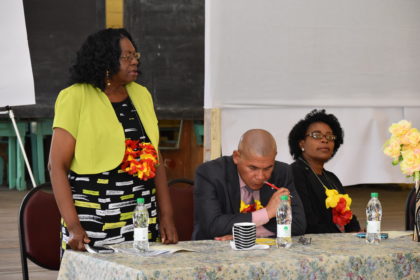