“I am quite happy to be here among the residents of Hopetown today to celebrate the rehabilitative and beautification works that have been completed by members of your community, Minister Ally told the gathering, which included Attorney General and Minister of Legal Affairs, Mr. Basil Williams, Ms. Jennifer Wade and Mr. Harry Gill, both Members of Parliament, other special invitees and residents.

She commended the community on their collective effort, noting that she is inspired and proud that citizens took ownership for enhancing their environment. The Minister also expressed hope that these efforts will be emulated as initiatives such as these can foster social cohesion in communities as it positive promotes interaction among community members.

“I am quite certain that persons who were involved in rehabilitative work can tell stories about how this activity has brought them together and further established and strengthened relationships… When people have the chance to get to know each other, they focus on what they have in common, rather than differences,” she said.

Meanwhile, Ms. Carol Smith-Joseph, Regional Councillor of Mahaica-Berbice (Region 5) made a roll call of persons who contributed to the success of the exercise. These include the Region Five Democratic Council, Deputy Regional Officer and others. She singled out Hopetown resident Mr. Asquith Hamilton, who built the road; Sarge Rice Mill, who paid for the seats; Mr. James Nicholson, who paid all the labour costs; the Mahaica-Mahaicony-Abary Rice Development Scheme also came in for special mention. Ms. Smith-Joseph herself purchased all the lights for the street.

She also extended gratitude to the Minister and other dignitaries for participating in the commissioning, noting that their presence signifies that, “Hopetown, a village with a rich and enduring legacy of achievement in academia, sport and culture is undoubtedly deserving of this aesthetically beautiful and modern thoroughfare we call Main Street”. 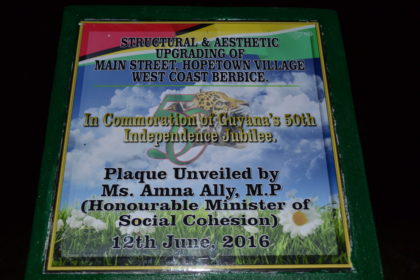 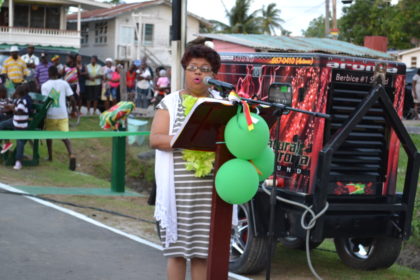 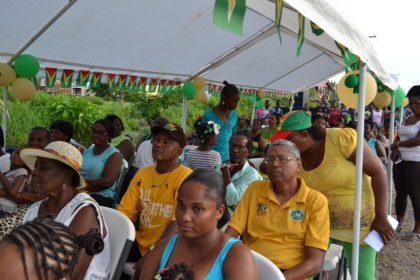