‘Managing your community is about leadership and responsibility’ – Min. Allicock

Residents of Stewartville and surrounding communities were, on Wednesday evening, urged to be more actively involved in the affairs of their Neighbourhood Democratic Council (NDC).

During a community meeting at the Stewartville Secondary School, West Coast of Demerara, Minister of Indigenous Peoples’ Affairs, Hon. Sydney Allicock, Minister within the Ministry of Social Protection with responsibility for Labour, Hon. Keith Scott and Member of Parliament (MP), Hon. Michael Carrington listened to the concerns of the residents in the communities. 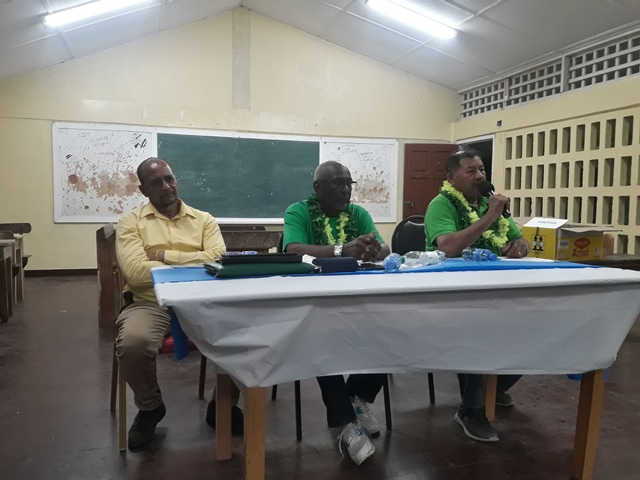 [In the photo, from left] Member of Parliament (MP), Hon. Michael Carrington, Minister of Indigenous Peoples’ Affairs, Hon. Sydney Allicock, and Minister within the Ministry of Social Protection, with responsibility for Labour, Hon. Keith Scott. 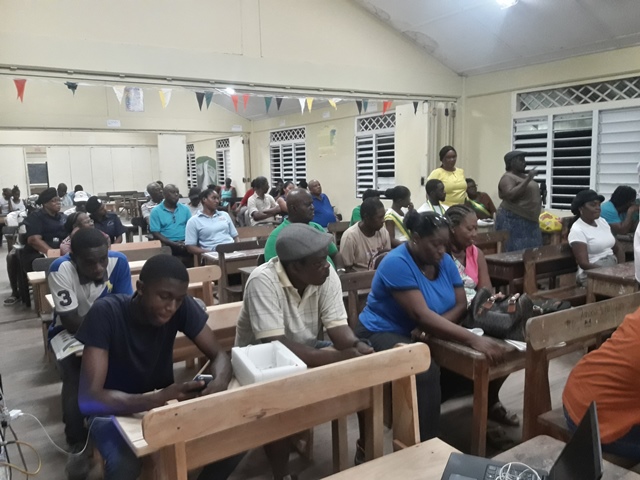 Some of the Stewartville residents at the community meeting.

Many of the complaints surrounded the operations of the Stewartville/ Cornelia Ida NDC which is run by the opposition. According to the residents, development in the community is obstructed due to the council’s lack of cooperation.

Christine Smise, a resident of Stewartville, told the government officials that the NDC has not been actively desilting the drains or removing the weeds in the community. Another resident, Celeste Daniels, related that there is always an issue when residents visit the office to pay their rates and taxes. Several other residents expressed their frustration when dealing with the NDC with many of them disclosing that they are not familiar with those employed with the council.

After listening to the residents, Minister Allicock encouraged them to take responsibility for their community. He reminded that when the Coalition took office in 2015, His Excellency, President David Granger, made a conscious effort to decentralise government.

He noted that while the NDC has the power, it is the responsibility of the residents to ensure that it is managed correctly and in their best interest.

“It is about leadership and responsibility… you need to understand that the opportunity to manage your affairs is good power in your hands,” emphasised Minister Allicock.

Echoing similar sentiments, Minister Scott disclosed that the central government has been receiving complaints about some NDCs being unwilling to operate in the best interest of citizens. This, the Labour Minister said, is being addressed with the respective Regional Chairmen under which the NDC falls.

He called on them to organise and take community action, which will positively impact the residents.