Masqueraders usher in the Christmas festivities

(Georgetown, December 19, 2016) –  With Christmas being a mere six days away many Guyanese are making their way to the City of Georgetown to do their usual Christmas shopping. This festive season is by far the most anticipated by many Guyanese (both young and old).

In an effort to give all Guyanese and visitors a unique experience for the holidays, the Ministry of Education, Department of Culture, Youth and Sport in partnership with the Guyana Cultural Association of New York, Inc., today launched the Masquerade Jamboree. This event seeks to reignite the appreciation of, and participation in the masquerade art form.

Members of the Guyana Cultural Association of New York, including Roslyn October- Eden, flew to Guyana to support this event. It was announced that recently the Association’s Board decided to bestow Rudolph “Putagee” Viveros with a Lifetime Achievement Award for his contributions to the artform.

October-Eden noted her satisfaction with the participation by many youngsters. She reiterated that they are the future of the masquerade in Guyana and they should not be seen as nuisances.

It was indicated that the movements by the masqueraders can be used in popular culture (e.g. music videos). This is done by the Jamaicans.

Later this evening there will be a Chant and Concert (Focus on Masquerade Language) at the Theatre Guild commencing at 07:00pm. On December 20th there will be a Flounce Off at the Plaisance Community Centre Ground where eight Masquerade Bands will converge to showcase their skills. These include Torch and Showtime from Region 10, Ann’s Grove Warriors, Victoria Renegades and Fyah in De Land from Region 4; Golden Arrowhead from Region 3; and Fire-Red and Village Ram from Region 2.

Finally, on December 21st a video show, readings and children’s performance will be held at the National School of Dance. At this event the launch of the first children’s masquerade book will be unveiled. 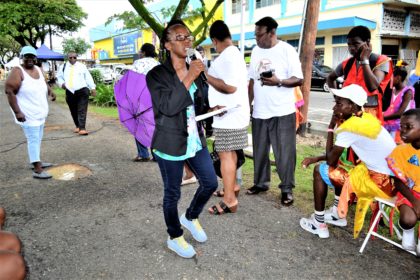 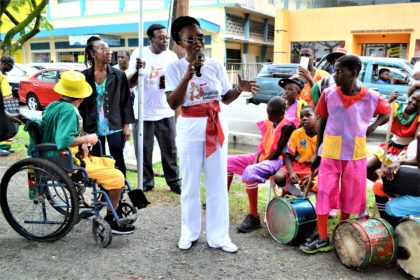