Deputy-Director of Solid Waste Management, Floyd Rollins stated that the exercise was completed in two phases. 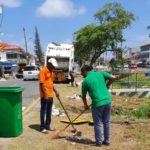 Mayor of Georgetown His Worship Pandit Ubraj Narine pitches in to help with the City Council clean up exercise of the Mashramani route. 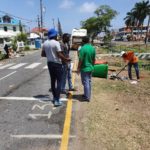 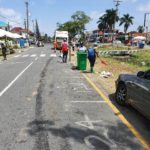 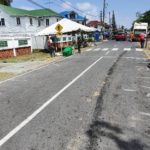 “Providing that all goes well and depending on the magnitude of waste we have to deal with, we should be able to clean the entire Mash route and Durban Park before the day is out,” Rollins told DPI.

Today, Mayor of Georgetown, His Worship Pandit Ubraj Narine said he is satisfied pleased with the approach the municipality has been taking to restore the City after these major events.

“The employees are out with one goal and that is to ensure by a certain time, if one passes along this route there must be no evidence that we held such an enormous event yesterday,” Mayor Narine said as he raked a plastic bottle from the nearby trench.

According to the Mayor, over the years the council has adopted an “instant clean-up approach” after the annual Mashramani costume and float parade. ” This is a measure that we will continue to implement,” he added.

The municipality is hoping to complete the exercise by noon.