Eighteen (18) representatives from the State and privately owned media houses and Government Communications Officers will be in China for three weeks. They are attending the 2016 Seminar for Media Officials and Journalists hosted by the Government of the People’s Republic of China, July 13 – August 1, 2016.

At a meeting today with Prime Minister Moses Nagamootoo, the delegation was urged to be good ambassadors and represent Guyana with dignity and purpose. 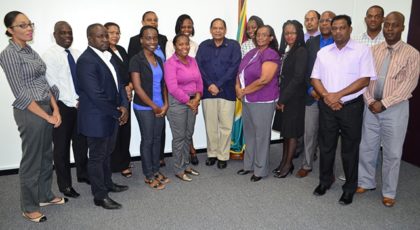 Members of media delegation that will be heading to China with Prime Minister, Moses Nagamootoo

In an enlivened discussion, the Prime Minister shared his experiences of China and urged the delegation to make full use of the opportunity to learn all they can from one of the fastest growing economies of the world. He also encouraged the delegation to ‘taste’ the culture of the host country.

Present also at the meeting was Director of Public Information, Imran Khan who enjoined the Prime Minister in urging the media operatives and officials to be good ambassadors of their country.

Director of the Government Information Agency (GINA), Beverley Alert, expressed gratitude on behalf of the entire delegation to the Prime Minister and through him to the Government of Guyana for the opportunity afforded the media body.

Attendance to the seminar is being funded by China.