Minister of Social Protection, the Hon. Amna Ally has described the action of the bauxite company RUSAL to lay off 326 Guyanese workers as disrespectful and has demanded that the company reconsider its position. 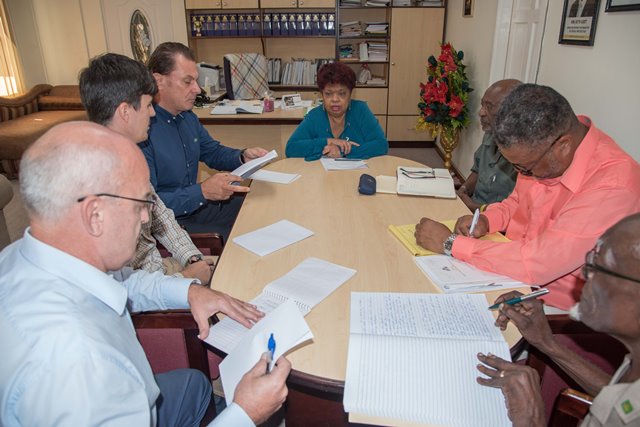 Minister Ally along with Minister within the Ministry, the Hon. Keith Scott and Chief Labour Officer, Charles Ogle met with executives of RUSAL to determine the way forward after they announced they were suspending their operations along the Berbice River and laid off a total of 288 workers.  Today, during the meeting at the Ministry’s Lamaha Street Office, the company announced the termination of 326 workers.

“We are advocating a peaceful consensual decision on this matter. We want both sides to win and I can tell you of great concern is the workers   because it is not easy for 326 persons to be laid off so our first demand is that we are asking for all of them to be rehired and then we can take it from there.”

“We would expect them to be nonpartisan, we don’t expect them to take sides but the impression we are getting is that they are taking sides. The fact that it is at the crucial time when it is close to the election you move from 142 to 288 and now to 326 workers, I believe that this is political mischief afoot.”

However, the minister noted that the administration will continue to engage the company on the matter with the view that representatives will return with practical recommendations.

“I believe that we can engage each other, we tried this morning but they are fixed on their position but give them a little time to cogitate so that they can come back with some real recommendations.”

The government is also demanding that the two workers who suffered electric shocks while on duty last year be compensated, and reconsider the transportation offered to the students at Aroaima.

Minister Keith Scott Minister Scott said the company did not inform the Labour Department or the Guyana Bauxite and General Workers Union (GB&GWU) about the move to terminate the workers.

“You have erred again and it is illegal to send home workers without informing us…those things I will never accept,’ Minister Scott underscored.

He told the RUSAL executives the workers should never be used as pawns in a disagreement between the company, the union and the government.  Further, Minister Scott explained that the government did intervene shortly after the blocking of the Berbice River.