Min. Greenidge, Canadian, Ecuadorian counterparts meet on sidelines of Summit of the Americas

Minister of Foreign Affairs, Carl Greenidge engaged his Ministerial counterparts from Canada and Ecuador on the sidelines of the Summit Implementation Review Group (SIRG) meeting today. 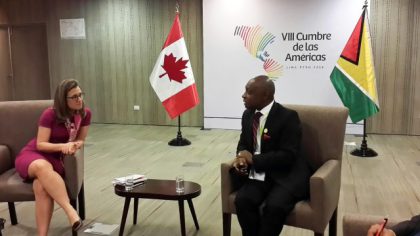 In his first meeting with Minister Freeland, Minister Greenidge noted that the issue of Guyana’s territorial integrity and its progress was discussed along with trade cooperation with CARICOM (Caribbean Community) and other areas of cooperation.

“I got the impression that we saw eye to eye on a lot of things. Canada has a young Prime Minister bringing with him his own initiatives and history and we thought that that was a great opportunity for Guyana that we could perhaps do a lot in that regards,” Minister Greenidge explained.

The Minister noted that this is a preparatory meeting which is a precursor to the meeting between President David Granger and Prime Minister Justin Trudeau. Minister Greenidge said this meeting is expected to happen during the Commonwealth Heads of Government meeting in London next week. 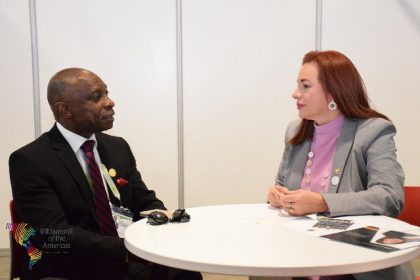 Discussions were also centred around issues affecting the Guyana diaspora in Canada. “We spoke also about raising the level of activity both in Toronto and in Ottawa,” Minister Greenidge said. The Guyanese diaspora in Canada is estimated to be around 200,000 according to the High Commission of Canada to Guyana and Suriname.

Diplomatic Relations between Guyana and Canada dates back post-independence. The Canadian Commission was opened in Guyana in March 1964. Guyana’s High Commission to Canada is also Canada’s Plenipotentiary Representative to CARICOM.

The two countries have good bilateral relations resulting from political ties through the Commonwealth, commercial links, development assistance and immigration.

Minister Fernanda Espinosa has commended Guyana for the conservation of its forestry, Minister Greenidge noted. Guyana is expected to participate in the Amazon Cooperation Treaty Organization (OTCA) Heads of Government Summit later this year.