The Guyana Geology and Mines Commission (GGMC) will review its management and organisational structure to deal with the many challenges it faces,  Minister of Natural Resources Raphael Trotman said.

Minister Trotman, at the 37th anniversary observance of the GGMC held at Park Rayne, Rahaman’s Park, East Bank Demerara, said that the review is aimed at making the commission more efficient to deal with the myriad of challenges it has to deal with. 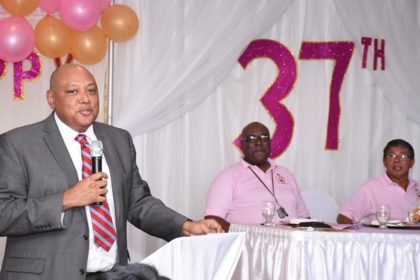 Minister Trotman informed the gathering that government has identified key priorities which will inform the GGMC on the way forward. He spoke of the continual improvement of GGMC as an organisation. “…the second category are those that address issues that are pertinent to miners and stakeholders in the mining and petroleum sectors,” Trotman said.

It is important to enhance the general image of the sector in particular the GGMC by “promoting greater levels of research, surveys, efficiency, transparency and accountability,” Trotman pointed out.

Creating opportunities for the development of the organisation through investment in training is essential towards achieving this goal.  The Natural Resources Ministry will be developing a mining policy framework to inform the long-term development of the GGMC.

Government also plans to re-orient the Guyana Mining School and training centre to become an institute of excellence, “capable of training staff and stakeholders alike” particularly to function in the emerging oil and gas sector and mining.

Trotman said government also recognised the need for diversification in the sector. This means more focus on bauxite production and other minerals. 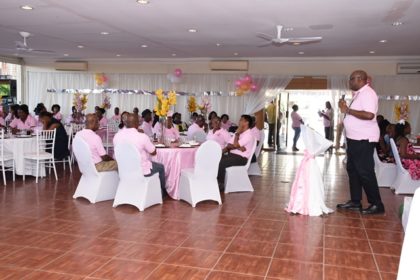 However, Minister Trotman said that miners must work in tandem with the GGMC to ensure the transformation of the sector. “The mining community in my view has to do a little more to regulate itself and work in partnership with the GGMC,” Trotman told the gathering of GGMC workers. The responsibility must be on mine owners and proprietors to ensure they are “more knowledgeable, adaptable and qualified in the business that they chose to enter into especially when huge sums of money are involved and human life is at risk.”

Improving occupational health and safety in mining is a top priority for Trotman and the government. For the year, there have been four mining deaths. “We believe that one death is too many,” Trotman said.

The extractive sector has performed well in its mid-year report. Gold and diamond have exceeded their targeted production. Gold is expected to exceed 600,000 ounces by the end of the year.

Trotman conveyed government’s commitment to working with the GGMC to ensure both miners and stakeholders enjoy higher yielding lands, they promote higher standards in mining technologies, improve monitoring and compliance and provide technical support in the furtherance of best practices in the industry.

Meanwhile, Dennison pointed out that the GGMC has already begun building staff capacity. “We have a relatively young cadre of operators, officers and from the perspective of building that cadre, building the capacity helping them to understand what their appointed functions are and how to carry out those functions.”

There is also the need to increase the GGMC’s public relations, Dennison added.  “I know that there is a perception out there about what the commission is and we have to get it out there in a better way that we’ve got to do a little more self-promotion,” Dennison said.

Additionally, GGMC’s long serving staff were honoured with plaques and gifts. Children of staff were also presented with bursary awards at the anniversary celebrations.