Residents from several communities in Region One were engaged in meetings with Minister of Indigenous Peoples’ Affairs, Sydney Allicock and team over the weekend.

The visits are part of government’s programme to ensure that the development of  indigenous communities are adequately catered for. The communities visited include Assakata, Santa Rosa, Kwebanna and Warapoka.

Residents participated in discussions and raised issues with the Minister and his team. 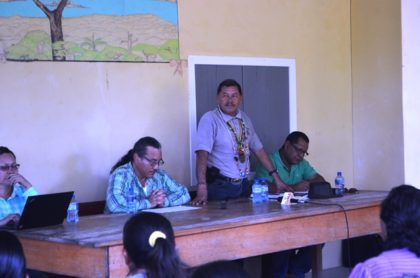 Minister Allicock asked the residents for their input for the development of their communities. “We believe that you have a lot to tell us, and we would like to listen to what your imaginations are for moving your community forward… and how we could interact as a people, as a government, and looking into the future.”

Regional Chairman Brentnol Ashley urged residents of the various communities to work together for their development. Ashley reminded the Toshaos and council members that they are responsible for leading their communities.

“Work with your people to bring them together and you have a right as a council, that if anybody comes to your village and utters things that would make your people upset or dis-united, to speak to those persons,” Ashley urged.

When the Minister and his team visited the community of Assakata, residents raised a number of issues. Resident and health worker, Nafissa Daniels   pointed out that the community’s health centre needs adequate supplies of drugs.  According to Daniels, the health centre has only received drugs once for the year. 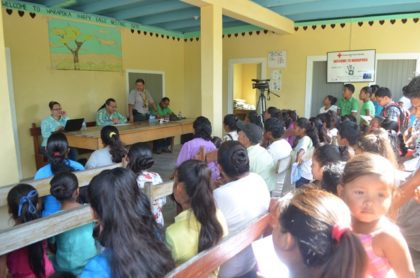 Residents of Warapoka during the meeting with Minister of Indigenous Peoples’ Affairs, Sydney Allicock

Regional Health officer (RHO), Region One, Cerdel  McWatt assured the residents that the issue of drugs will be addressed immediately. In addition, McWatt explained that he recognised that there is a need for additional health workers in the community. However, he noted that he has already made a request to the Ministry of Public Health to address the issue.

One of the issues raised by residents in Kwebanna was the need for a secondary school in the community and the rehabilitation of the nursery school. Tonya Wilson, a teacher at the Kwebanna Nursery school pointed out that the children are attending school in an unsafe environment.

Another resident, Maureen Henry told the visiting team that there is a need for a police station in the community. 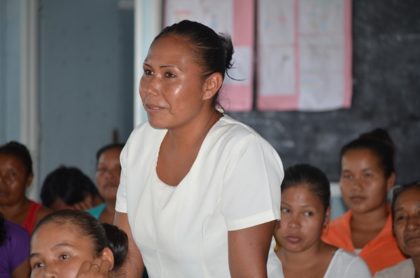 Resident of Assakata Nafissa Daniels, raising an issue with Minister of Indigenous Peoples’ Affairs, Sydney Allicock and his team during a community meeting

Advisor to the Minister of Indigenous Peoples’ Affairs Mervyn Williams, addressing the concerns of residents who are unable to access the forms noted, that he was aware of the issue and has been in contact with the Ministry of Business which is currently handling the matter.

Warapoka residents raised concerns of transportation, education, and health with the Minister and his team. Residents were reminded by Minister Allicock that they are just as important as the people living on the coast and require the same dedication from government. The Minister told the residents that, “I would like to say that you are very important and don’t talk as though you are less (important) than the people on the coast.”

The Government Information Agency (GINA) was in Warapoka and spoke to the residents who were elated to have the Minister and his team visit and address their issues.

Jeremy, a resident, stated “I was really glad to have the minister here today for the first time for the new government. I felt good. I was able to share my concerns with him.” 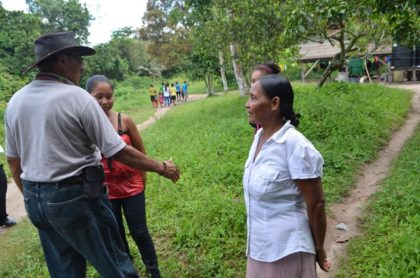 Armey Welcome a teacher in Warapoka said that he appreciates what the government is doing.  “I know that they are doing a good job. At least he (the minister) shows his concern that he can hear our views which is very important to the environment here in the community of Warapoka,” he explained.

Another resident, Pauline Henry said that the meeting was a good one.  She pointed out that, “the people responded quite good. They actually give the Minister their views on how they would like to see the community develop.” 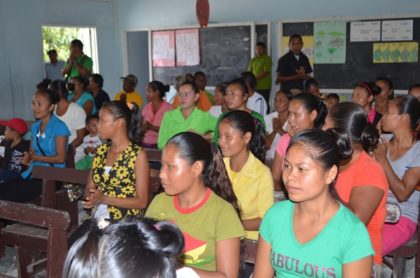 Minister Allicock along with his team had prior, visited several indigenous communities along the Pomeroon River in Region Two where similar meetings were held with residents. The communities visited were St. Monica, Wakapoa and Akawini.

The meetings are a part of Government’s efforts to ensure that the indigenous people are catered for when crafting the 2017 National Budget. Minister Allicock is expected to visit more indigenous communities over the next month.