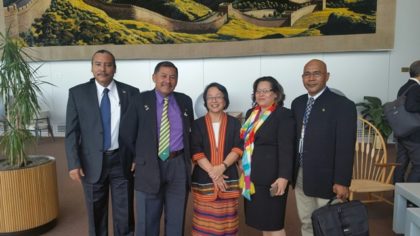 The Vice President outlined the policies of the Government of Guyana on Indigenous Issues and elaborated on Government’s plan of action and actual interventions in this regard.  He spoke of the strides made by Government in hinterland development and pointed to the plans for infrastructural expansion, improvement in the delivery of education, health care services and ICT connectivity among other areas.

Linking these current and future interventions to the eventual decentralisation of Government services, Mr Allicock declared that in keeping with President David Granger’s vision, there will no longer be a distinction between rural and coastal Guyana.  The vision of “One Nation” will be attained.

Madam Tauli-Corpuz said that she was happy to hear of the new approach to Indigenous Peoples’ issues in Guyana. She posited that taken as a whole, these initiatives, the independence of the NTC and the capacity enhancement of Indigenous youth and women in particular, present exciting possibilities.

The Special Rapporteur enquired about the adequacy of the Amerindian Act and whether Government was contemplating modification of this piece of Legislation.  She also enquired about balancing investments with Indigenous Peoples’ Rights.

Government through the Ministry of Indigenous Peoples’ Affairs has already invited the NTC to submit its views on possible strengthening of the Amerindian Act.  Assurance was also given of the balancing of rights of investors and Indigenous rights by way of the example of the presence of an Indigenous person on the Government’s negotiating team currently engaged in discussions with Barama Company Limited for renewal of their investment agreement.

The Special Rapporteur indicated her interest in visiting Guyana soon.  She is eager to meet with other Government officials, Indigenous leaders and to visit Indigenous villages and communities.