Georgetown, Guyana – (July 11, 2016) Minister of Social Cohesion, Ms. Amna Ally, today, said that she was “particularly proud” to be presenting the top performers in the Upper Demerara – Upper Berbice Region at the 2016 National Grade Six Assessment (NGSA) with bicycles and backpacks.

The Minister celebrated with the region, which she noted had done extremely well with four of the top students earning places at Queen’s College, 10 at The Bishops’ High, four at Saint Stanislaus College and three at St. Roses High. Twenty-one students were selected to be honoured for their performance, though one did not attend today’s ceremony and will receive his bicycle and bag on a later date. 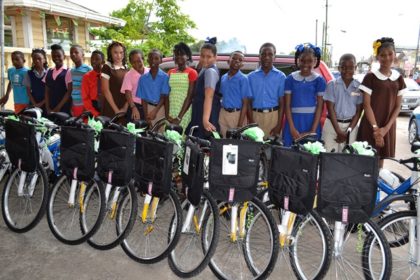 “Top students, top schools,” she said, as teachers, parents, students and other supporters erupted into loud cheers, during the ceremony, which was held at the Department of Education, Republic Avenue, Region Ten.

Minister Ally also noted that this is the first time in many years that the top regional performers are being honoured and lauded President David Granger’s vision to make Guyana “an education nation”. Since the genesis of the Boats, Buses, Bicycles plus Breakfast and Books (Five Bs) programme 10 buses, nine boats and hundreds of bicycles have been donated to children and communities, all aimed at reducing inequalities to education, she said. 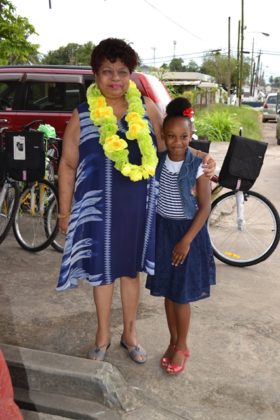 “I want to say to you Region Ten that you are very fortunate as you are enjoying many of the Bs. You have enjoyed boats; three boats have been allocated to this region – Berbice River, Demerara River and Essequibo River because we recently gave [one to] River’s View… You already have one bus… and you are now fortunate to get bicycles and bags,” the Minister said.

She then charged the gathering to pool their resources to develop their town, region and country. “I ask you Region Ten to become builders, another ‘B’ in this region… Linden is doing well,” she said. The Minister also said that while there was much furore when the government stopped the poorly administered distribution of the $10,000 school voucher operated by the previous administration. However, “It is not about the $10,000. It is about providing a better life for our people… It is about providing opportunities for our young people to be better citizens of this country,” she said.

Minister Ally also extended thanks to His Worship, Mayor Carywn Holland, who advanced the Ministry’s plans to reward the top students in his constituency by donating a number of bicycles for distribution. 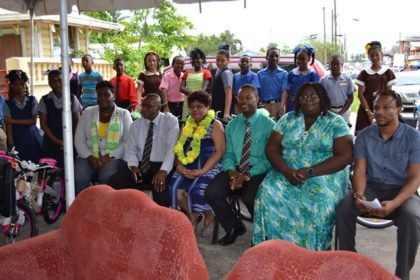 Mr. Holland recalled that he once benefited from support, during his school years and has been inspired by the President’s Five Bs programme. Further, he announced that he will establish the Cecil Holland Fund for Top Students, in memory of his father, who died recently and who had been a source of support to one of the top students honoured today. The Mayor also pledged to provide the bicycle for the  honouree, who was not present at today’s event.

Meanwhile, Mr. Renis Morian, Regional Chairman said he was pleased with government’s efforts to make education accessible to all the nation’s children.

PTO“I’m very much pleased to know that we have a government that is pursuing education; that is supporting all initiatives that will lend to the extension of education among our children and young people. I’m extremely happy,” he said. 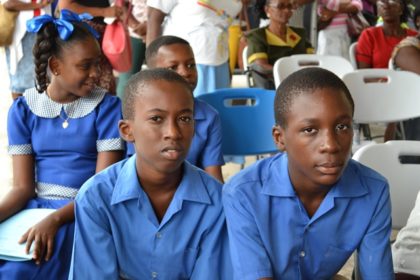 Some of the top students patiently wait for their names to be called to receive their bicycles.

Ms. Delcia Casim wowed the audience with her rendition of Whitney Houston’s “The Greatest Love of All”. The gathering also sung “Let us co-operate for Guyana” as the spirit of nationalism permeated the ceremony.