Minister within the ministry of Public Health, Dr. Karen Cummings today, paid a visit to Linden for one of the scheduled activities for ‘Linden Town Week’, the Annual Health fair which was held at the MacKenzie car park. 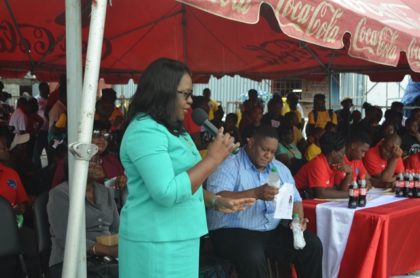 Minister in the Ministry of Public Health, Dr Karen Cummings addressing attendees at the health fair at the Mackenzie car park

The minister was accompanied by a team of health officials, as well as the United States Ambassador to Guyana, His Excellency Perry Holloway, Mayor of the mining town Carwyn Holland, Deputy Mayor Waneka Arrindell, Regional Democratic Chairman,  Renis Morian, and other officials.

Touching on ‘Health at 50’, in keeping with the Jubilee Independence celebrations, the minister applauded the Linden Hospital complex for its record of zero maternal deaths. In addition, the control of the zika and chikungunya viruses in the region has been impressive, and health care officials in the region were encouraged to maintain this level of excellence.

“Over the last 50 years, the health sector in Guyana has worked tirelessly with very limited resources to ensure it delivered health care services to Guyanese. The achievements of the Guyanese health sector have been modest, but substantial,” Dr. Cummings stated.

Minister Cummings touched on the issue of Non-Communicable Diseases (NCDs) that are still not receiving the attention they deserve even though they are prevalent in Guyana. She noted that cardiovascular diseases, cancers, chronic respiratory diseases and diabetes are some of the main NCDs.

“According to the World Health Organisation (WHO), there are a number of modifiable health risk factors that are attributed to the presence and prevalence of NCDs. They are tobacco use, physical inactivity, unhealthy diet, and the harmful use of alcohol,” she stated. 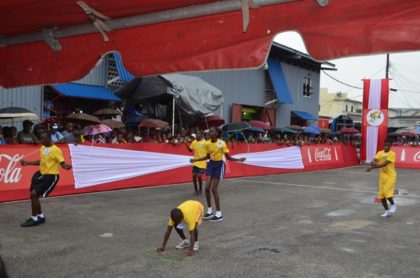 She added that these NCDs carry a huge cost in terms of caring for the persons who have been diagnosed with them; hence prevention is better than cure.

The Ministry of Public Health has put in place a number of strategic initiatives to curb the increasing number of NCD cases, as well as prevent new ones from emerging. “These initiatives will effectively address the future burden of disease, promote healthy lifestyles, and increase the potential benefit of a healthier population, thus contributing to economic development.”

One major contribution to a significant number of NCD cases is smoking. The Ministry of Public Health will be introducing stringent legislation in parliament, aimed at reducing tobacco use.

Regional Chairman Morian asserted that Linden is on its way to being a fully developed town, and can be seen as a link to all other regions and major towns.

In addition, the Regional Health Officer saluted the Public Health Ministry for its contributions made towards the growth and improvement of the health sector in Region Ten, but stressed the need for more collaborative efforts with the town council and other stakeholders to achieve a healthier population. 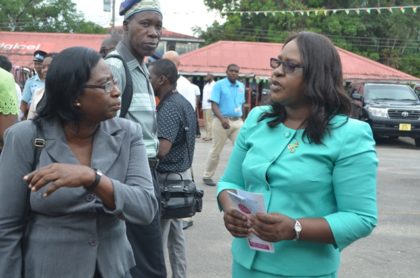 Minister in the Ministry of Public Health, Dr Karen Cummings in discussion with a Regional Health official at the health fair held at the Mackenzie car park

Ambassador Holloway congratulated the small mining town on a number of achievements that are being celebrated in this period. Some of these are 46 years as a town, 100 years of bauxite mining and 50 years of US/Guyana diplomatic ties. The latter has seen the building of the Linden/Soesdyke Highway which remains the main access road to the small mining town.

Some other achievements of the entire health sector countrywide were also highlighted. Some of them are: Improved Immunisation coverage, control of common communicable diseases such as acute gastroenteritis, acute respiratory infection, skin infections and worm infection, reduction of severe malnutrition (under 5) to less than 0.3%, and malaria elimination from the coastal belt.

Dr. Cummings informed, that the Public Health Ministry is making strides to modernise the health sector through expansion, with Linden being one of the channels of the modernisation process.

The health fair which attracted a large number of residents from the mining town, focused on educating the population on moving towards a healthier lifestyle. Minister Cummings and her team then attended a scheduled activity that was showcased in line with ‘a healthy lifestyle’; the ‘Skip to My Lou’ competition that accommodated the participation of a number of primary and secondary schools in Linden. 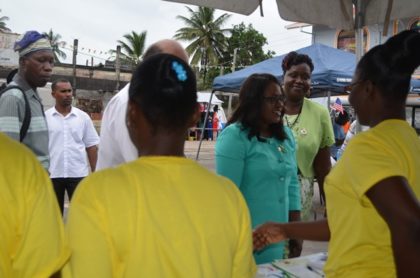 Minister in the Ministry of Public Health, Dr Karen Cummings interacting with persons at one of the booths at the health fair