Minister Garrido-Lowe readily accepted the councils’ invitation to attend, and was warmly greeted on her arrival in Chenapou Village the host for the Councils gathering. 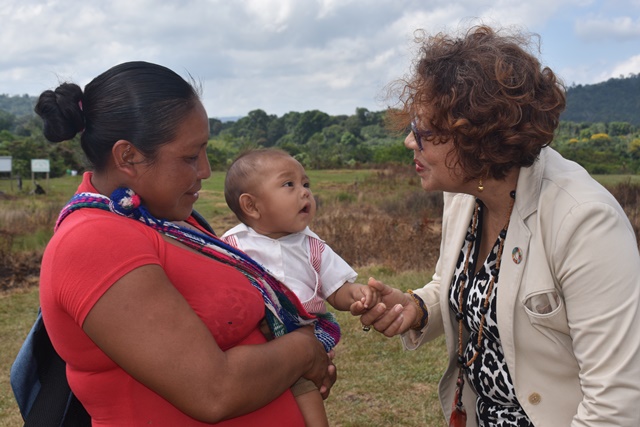 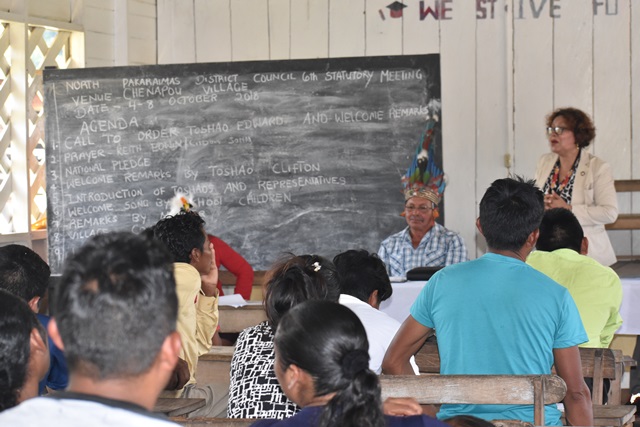 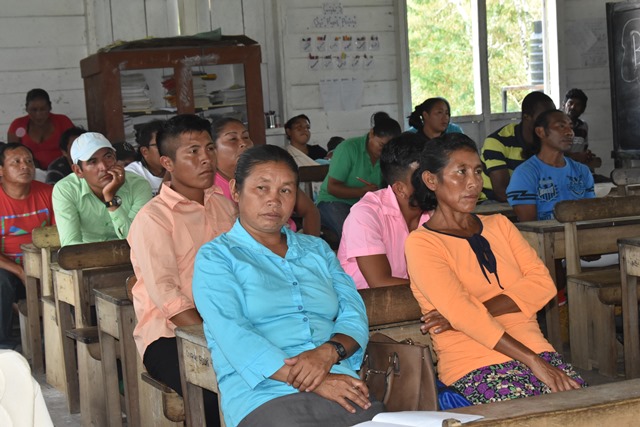 During Thursday’s opening of the four-day meeting, Minister Garrido-Lowe said working together collectively to bring about financial independence will ensure development is realized.

“As a group, as Toshao’s together you can discuss ways of how you can become financially independent, how you can earn money, because we have been living like this a long time. We are a rich people you know, we own lots of land which we have to start utilizing for our benefit. Government assists in many ways but we of ourselves must band together; we must come up with ideas to get support,”, the minister said.

She pointed to two economically viable projects in the North Pakaraima which will ensure villages become independent. Namely,  the thriving Pakaraima Flavours in Paramakatoi Village and the soon to be established Lapidary Project, which is being worked on, in Monkey Mountain..

“You didn’t have that opportunity before but because of Government’s support you will have these projects for your benefit and those are only two projects that will bring monies to the people quite easily”, she noted.

The minister emphasised the need for collective thinking and careful planning so that when projects are earmarked for villages or an anchor project in a particular village, residents will be prepared to ensure it is a success.

Speaking on the housing project for Chenapou, Minister Garrido-Lowe reminded that seven homes will be rebuilt for families whose homes were destroyed by devastating floods. She assured that the project will commence shortly.

The minister also updated residents on some of the activities executed by the Ministry which will ensure the indigenous peoples continue to be empowered. Among them, a Welfare Officers’ Training which focused on equipping Officers to adequately deal with social ills affecting villages. Ten officers were trained from Regions One, Seven, Eight and Nine.

Toshaos were also updated on the Village Improvement Plans which have already seen 53 villages in Region Nine completing their VIP’s, while Santa Rosa in Region One and Mainstay/Whayaka in Region Two are working to formulate theirs. This will ensure robust village economies, women and youth are empowered while providing access to unlimited possibilities for both personal and communal development.

The CDP is part the Amerindian Development Fund/GRIF Project.

Meanwhile, the North Pakaraimas is known for its eco-tourism potential since it is home to the Majestic Kaieteur Falls.

Clyde Edwards a Representative from the Guyana Tourism Authority (GTA) who was a member of the team, shared with residents the GTA’s plan of working with the village to develop a tourism package there.

“At the GTA we have identified a community to work with and we have identified Chenapou Village for Tourism development for this year. But we don’t want to just start this project, we would like to come here to speak to the residents, to listen to your ideas and suggestions. So, very soon we will be coming here because we would like to extend the tour from Kaieteur to Chenapou. This is all in an effort to make Chenapou a marketable tourism destination,” Edwards said.

Meanwhile, residents highlighted several areas where they would like to see improvements. One such project is the ongoing potable water system being set-up by the Guyana Water Inc. which according to them will ease considerably the current water situation there. He said while the stoppage was partly due to the inclement weather, he’s hopeful that works will commence shortly.

One resident noted that teachers, parents and children would have to assist in fetching water over long distances to both the nursery and primary schools to assist with their daily needs.

Minister Garrido-Lowe has since engaged Chief Executive Officer of GWI Dr. Richard Van West Charles on the situation and according to the C.E.O, the company is in the process of acquiring more equipment and works will resume shortly.

Other concerns highlighted include the worrying situation for parents of students residing in the dormitory of the Paramakatoi Secondary School.

Minister Garrido-Lowe said contact will be made with the Minister of Education to have the issues there immediately addressed.

One resident also noted the timely awarding of contracts in the Region and according to the Minister, the Regions R.E.O Mr. Carl Parker has promised to address same when he attends Sunday’s session.

The Indigenous Peoples’ living in the Region have brought to the attention of the Minister, the desire to own their land collective as the Patamona peoples’ territory and noted that they will continue to lobby for this to be realized.

Meanwhile, representatives from the Amerindian Peoples’ Association (APA) were also in attendance.
Some seventeen villages form the North Pakaraima form the District Council which allows leaders to hold productive discussions among themselves as well was with the regional Authorities.