The alleged closure of unlicenced businesses in the Rosignol stelling area by representatives of the Guyana Revenue Authority (GRA) was addressed on Monday, by Minister of Business, Dominic Gaskin when he met with a number of shop owners in the West Bank Berbice area.

Twenty (20) shop owners, as well as representatives of the West Berbice Chamber of Commerce, raised a number of issues including shops operating on State lands, hence they are unable to meet GRA licencing requirements; seizure of alcoholic beverages by GRA representatives under the Customs Act, and shop licence requirements for new tenants in mini-malls. 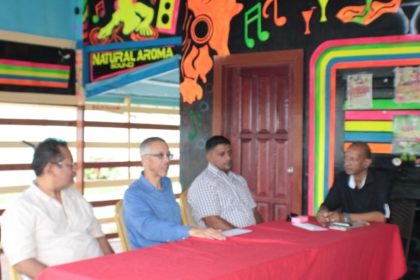 Responding to their concerns, Minister Gaskin emphasised the importance of all businesses operating within the laws of Guyana so as to minimise negative impacts they may have on communities, consumers and the rest of the economy.

The Minister explained that a significant number of businesses are operating outside of the existing legal and regulatory safeguards. This has created a free-for all in which no successful economy can develop, he stated.

He pointed out that when it comes to the sale of food and alcohol, the regulations are very firm as in most countries. He noted that it appeared that the goods seized by GRA officials were mostly alcoholic beverages and urged the shop owners to ensure that they are licenced to sell such products.

The shop owners have formed themselves into an association and are planning a collective approach to having their occupancy of the roadside area (state lands) regularised so that they can obtain licences. Most agreed that it was better if all businesses paid their fair share of taxes and operated within the laws of Guyana.

The Ministry of Business is working towards transitioning informal businesses to the formal economy to ensure Guyana’s economy becomes and remains a competitive one, which is capable of attracting investments.