Minister of Foreign Affairs Carl Greenidge said that Government had lost faith in the ‘good office’ process, essentially because of Venezuela’s non-cooperation with it, but that Government is now willing to give it one last try with the United Nation’s Secretary General’s (SG’s) nominee. 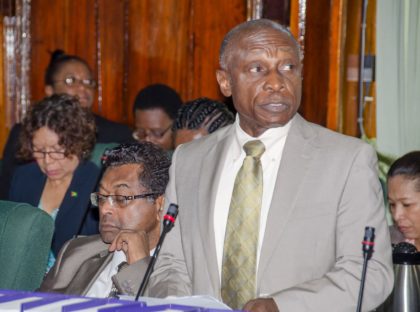 Minister of Foreign Affairs & Second Vice President, Carl Greenidge reports to the House on the latest update from the United Nations Secretary on the Guyana – Venezuela border controversy

Minister Greenidge was this morning addressing the National Assembly in light of the decision communicated to the Governments of Guyana and Venezuela by the  outgoing, SG, Ban Ki-moon on Friday, December 16, 2016, on the way forward on the border controversy.

In the communiqué, the SG had stated that the way forward on the border controversy between Guyana and Venezuela is for the ‘good office’ to occupy the forthcoming 12- month period. Further, if by the end of 2017, no significant process is made towards arriving at a full agreement for the solution of the controversy, he will choose the International Court of Justice as the next means of settlement, unless the Governments of Guyana and Venezuela jointly request that he refrain from doing so.

The SG also informed the Governments that the new SG, Antonio Gutterres who succeeds him, would be naming a Personal Representative, who will lead the parties in the 12 months of ‘good office.’ Guyana has since assured the SG of the country’s acceptance of his decision, and the Government’s commitment to every effort to making it a success.

But, addressing the House, this morning, Minister Greenidge warned that the ‘good office’ process can only produce mutually satisfactory results if Venezuela cooperates fully to that end.

“As we say in Guyana “one hand can’t clap. Guyana will cooperate in resolving the controversy that has arisen as a result of Venezuela’s contention that the 1899 Arbitral Award is null and void…we hope Venezuela will do likewise. If they do not, we will have readied ourselves for the International Court of Justice,” Minister Greenidge said.

In conveying his decision to Guyana and Venezuela, the SG had also promised ‘Good Offices’ with a ‘strengthened mandate of mediation.’

Minister Greenidge said the SG’s communiqué was “a most significant moment in our relations with Venezuela.” He noted that, “it promises one way or another,” the resolution of the country’s controversy with Venezuela.

The Minister expressed hope that the announcement brings satisfaction to all parties in the House, in light of the fact that “it has been the objective of all Governments of Guyana, since the early days of the Mixed Commission to resolve this matter with finality through a judicial process, particularly given our disappointment with the process through dialogue.”