Georgetown, Guyana – (August 12, 2016) The final report of the Commission of Inquiry into the deaths of Antonio and Joshua George, who perished in theJuly 8 fire at the Hadfield Street Drop-in Centre, was today handed over to Minister of State, Mr. Joseph Harmon at the Ministry of the Presidency by Commissioner, Retired Colonel Windee Algernon. 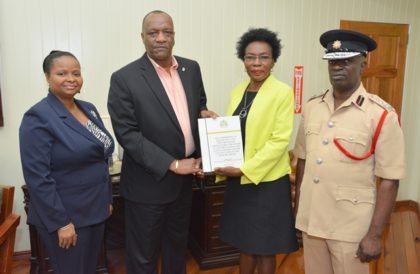 Minister of State, Mr. Joseph Harmon receives the report of the Commission of Inquiry into the deaths of the victims of the Hadfield Street Drop In Centre from Commissioner, Retired Colonel Windee Algernon(centre-right) . Minister of Social Protection, Ms. Volda Lawrence and Acting Chief Fire Officer, Mr. Winston McGregor (right) also received copies of the report.

As was stipulated in the terms of reference, the preliminary report had been submitted on July 22. Accepting the report today, Minister Harmon said that the recommendations within the preliminary report have been taken very seriously and that President Granger has since requested of the Minister of Public Security, Mr. Khemraj Ramjattan that a “fresh look” be given to the fire safety precautions and possible fire hazards at government buildings.

“Now that we have the [final] report, we are confident that the various ministries and government departments will look at the recommendations and do what is required so that we can provide safe and secure places not only for children, but for everyone. This was a tragedy, but as a State we have a responsibility to every person… This is a wakeup call for us insofar as fire safety and security are concerned,” the Minister said.

Copies of the report were also presented to Minister of Social Protection, Ms. Volda Lawrence and Acting Chief Fire Officer, Mr. Winston McGregor. Minister Lawrence, giving brief remarks, echoed Minister Harmon’s comments that the incident was a wakeup call and assured both the Minister and the Commissioner that the recommendations within the report will be looked at closely.

“There is already a meeting, which is scheduled to be held next week with the Director and Management of the Child Protection Unit in which we will discuss an action plan on how to implement the recommendations listed in the report,” she said. Minister Lawrence also said that her Ministry will continue to work closely with the family members of the two boys to ensure that they can “pick up and move on in their life” despite the terrible loss they have suffered.

Mr. McGregor assured the Minister that the Guyana Fire Service (GFS) is doing everything in its power to ensure that all public buildings are safe and adhere to fire safety guidelines.

Commenting on the contents of the report, Colonel Algernon said that in its compilation, she sought to provide much needed recommendations that would see the implementation of necessary mechanisms and systems that would prevent such an occurrence in the future.