Georgetown, Guyana – (August 5, 2016) Minister of State, Mr. Joseph Harmon, this afternoon, congratulated Commissioner General of the Guyana Revenue Authority (GRA), Mr. Godfrey Statia on his new appointment, during his first official meeting at the Ministry of the Presidency.

Minister Harmon welcomed Mr. Statia and informed him that the Ministry has an open door policy.

In response, Mr. Statia said that the Office of the Commissioner General of the GRA has also had a good relationship with the Government and he is hoping to establish the same with the Minister of State. He also said that pursuing all tax defaulters will be a priority for his office. 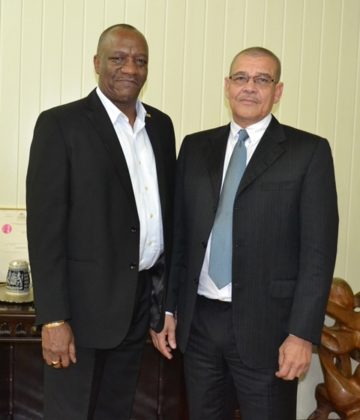 Minister of State, Mr. Joseph Harmon and Commissioner General of the Guyana Revenue Authority, Mr. Godfrey Statia at the Ministry of the Presidency, today.