(Ministry of Social Protection, August 12, 2016) – Minister of Social Protection, Volda Lawrence today challenged the local media fraternity to introduce a media literacy week to bring much needed attention to critical issues which the media can highlight. The Minister was at the time speaking at presentation ceremony of a report, “Women and Children in the Media: The presence of women, their administrative status; and the voices of children”. The report emanates from a study conducted by Ms. Karen Davis with support from the United Nations Children Fund for the Ministry. 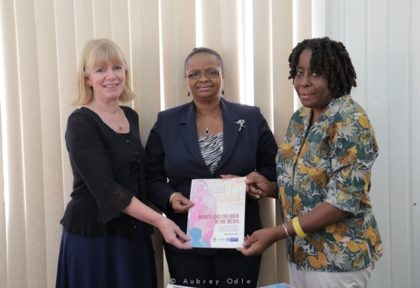 The study sought to examine how women and children are represented in the media and recommended, among other things, the need for “advocacy for an increase in the number of programming for women and by women to ensure that women’s needs and concerns are ventilated from a women’s perspective”. It also recommends that “there should be special programmes promoting child rights and responsibilities, the CRC (Commission on the Rights of the Child) and sensitising all concerned to the protective measures available to children, and about institutions which exist to protect them”

In this context, the Minister issued her challenge “to our local media – online, broadcast print and electronic – to build on the foundation of this UNICEF-funded document and others like it which currently exists. I want to advocate that all media owners and managers push for the introduction of an annual Media Literacy Week observance in Guyana beginning next year. There are critical issues which demand national attention and which the media can highlight during the proposed annual observance,” she said, adding that for women, the discourse can focus on, among other issues: Gender representation in the Guyanese media, women’s body image, and contributions of local women to Guyanese media evolution.

She also noted that the media is instrumental in helping children to deal with related issues including cyber bullying, cyber crime, excessive internet use, sexting, sexual exploitation and pornography. 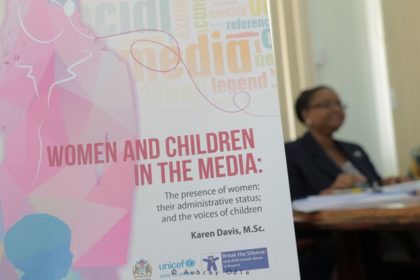 “Ladies and gentlemen the time has come for us as a society to advocate more vigorously for a gendered rebalancing in the top positions of our media. The time is also ripe for the nation’s children to be moved from the periphery of media attention and more to its centre,” she said.

UNICEF’s Representative, Ms. Marinne Flach described the report as very significant, noting that it highlights many issues for attention, including women’s representation on State Boards and the fact that women and children are often represented in the media in stereotypical ways. “We have a long way to go and we need to continue working on these issues…It is not a Guyana issue, a lot still has to be done worldwide.”

Thanking UNICEF for its support in project, Minister Lawrence noted that while many of the issues highlighted are cause for concern, the report gives stakeholders an opportunity to address many issues. Hence, her Ministry would be incorporating some of the issues to be addressed in its work programme and look forward to partner with other stakeholders to do the same.

“…it has, however, provided a platform from which we can revolutionise our media practices and launch national initiatives to help improve the well-being of our women and children. At every level of our education system, girls are doing better than boys yet, the report indicates that women remain a minority at the senior levels of local media houses. Their expertise is largely by-passed through employment practices at the managerial, policy-making, training and programming levels.”

Describing the project as labour of love, Ms. Davis said that the 2014-2015 study stemmed from the 1995 Beijing Platform for Action, which flagged 12 key areas, including women and the media, where urgent action was needed to ensure greater equality and opportunities for women and men. It was conceived in collaboration with the National Resource and Documentation Centre of the Ministry of Social Protection headed back then by Mrs. Yvonne Stephenson, who was succeeded by Ms. Yvette Bess.

“The figures were starling. It was found at that time only 27.3 percent of the membership on Boards of Directors were women; 37.4 percent of women held managerial positions across the media and 34.9 percent of women were classified as professional,” she said.

The report also stated that there are less than 20 percent female editors, with the print media showing higher figures than the electronic media.