Minister Lawrence urges parents …carry out your duty to your children

Social Protection Minister, Volda Lawrence is urging parents to be good role models and not shirk their duty to their children as they are the ones who influence their child/children in every aspect and leave lasting impressions. 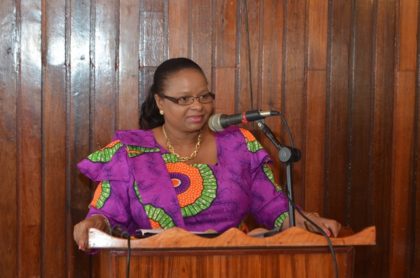 The Minister stated that parents’ roles are critical to their children’s future wellbeing and the way in which children merge in today’s society. Lack of appropriate sustained parenting often results in social ills in the society, the minister added.

Research shows that responsive parenting has the potential to promote normal development paths for children, more especially high-risk children such as those from low income backgrounds and premature births.

Minister Lawrence was delivering remarks at the Presbyterian Church of Guyana, Women’s Convention, held today, at the Ocean View Hotel under the theme “Commitment to Christ leads to effective parenting”.

The event saw participants from Regions Three, Five, Six and Ten along with Scientist Elinor Jordan. 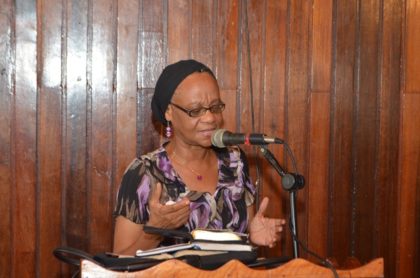 Elinor Jordan, making her presentation to the gathering at the Presbyterian Church of Guyana Women’s convention

The Minister explained that parents often forget that their involvement with their child or children will take them into society as productive citizens. The Minister said that parenting begins from pregnancy, noting that, “Women we have a special place in God’s heart as he has chosen us to fulfill creation, so do not renege on God’s purpose…our children are not a burden, or a hindrance.”

Further, Minister Lawrence noted that parenting is a partnership agreement. “For the purpose of creation, a man and a woman must unite, so it is not a one-sided affair, and it demands attention and care of both parties,” the Minister stated.

Effective parenting also includes the act or process of both parents being unanimous. The values the child or children are required to demonstrate, must be agreed on by both parents. Therefore, principles including love, respect, obedience, contentment, honesty, humility, and discipline among others that should be inculcated in the child for him or her to become socially acceptable, must be instilled, and common among both parents, Minister Lawrence stated. 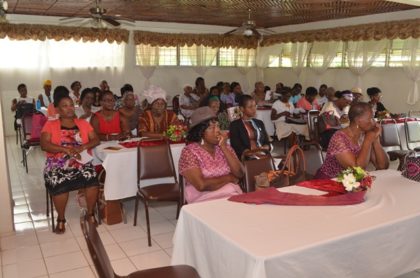 The gathering at the Presbyterian Church of Guyana Women’s convention

Additionally, the Minister pointed out that parents are often engaged with satisfying financial needs and neglect their roles as parents. “While I agree that finance is important, the consequences of child neglect results in dysfunctional homes, angered children, teenage pregnancy, child abuse and violence and suicide among others.”

The Minister encouraged parents not to take short cuts in carrying out their roles since it would be impossible to achieve the good life with delinquent behaviours. “If we are committed to Christ and his teachings, our parenting will be effective,” Minister Lawrence stated.

Meanwhile, Jordan echoed that the single parent family structure has taken a toll on society over the years. Jordan pointed out that there are many children who have suffered from single parenting which led to crisis in the family.

She encouraged parents to strive to break this epidemic and work toward effective parenting as it would greatly benefit children and aid them in becoming the future leaders of the country.