Georgetown, Guyana – (September 29, 2016) Minister of Social Protection Volda Lawrence on Thursday took a first hand look at the facilities at the New Amsterdam Male and Female Prisons, stopping to listen to the concerns of the female inmates.

Among those concerns are the need to upgrade the kitchen; renovation to the roof of the female prison, some of the structures, and the dining hall; and improved water facilities. Female prisoners also sought intervention to minimize the heat in the building and make accommodation for skills training. However, the facility lacks the necessary space to conduct such, according to Assistant Superintendent Olivia Cox and Mr. Paul James Acting Superintendent of Prisons, who accompanied the Minister on the tour of the facilities. At present one prisoner teaches fellow inmates to knit, while another teach them to sew. They requested raw materials to support these initiatives. During a tour of the kitchen, it was found that there is no Nutritionist on staff.

Inmates also requested that the prison be outfitted with a gym, as there is no space for recreational activities. The Minister committed to seeking support for repairs to the roof, the kitchen and dining hall upgrades and procurement of a suitable water pump to supply the facilities with potable water. She also agreed to discuss other concerns they have with her colleague, the Minister of Public Security.

Minister Lawrence used the opportunity to inform inmates about empowerment programmes they can access through the Ministry when they would have been released from prison. Among these are the People of Worth Entrepreneurial Resources (POWER) and the Women of Worth (WOW) Programmes. The POWER offer micro credit to couples and male single parents in difficult circumstances. The loan amounts will range from $100,000 – $200,000 for expansion of their small business ventures, at an interest rate of 6 percent.  The loan period is 12-24 months and the Guyana Bank for Trade and Industry (GBTI) is the lending institution.  Through WOW female single parents could access loans on concessionary terms at (GBTI) as well under similar conditions. 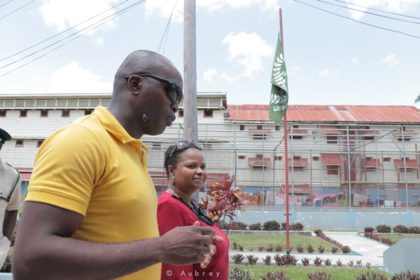 “When you leave here, we want to help you get back on your feet and we can do so through these programmes, so when you get out, you can come to the Ministry for assistance. Many of you in here may also require assistance for your children and we can look at that,” she offered.

Over at the male prison, concerns, officials voiced concerns about the physical conditions of the buildings. Deputy Director of Prisons, Gladwin Samuels said that monies are placed in successive budgets for repairs, but the resources available cannot cover all the needed repairs. Nevertheless, he said requests for several upgrades were submitted for the 2017 budget to improve facilities at the various prisons.

The Minister’s visit coincided with Prison Week being observed at various prisons across the country and she was treated to a rendition of songs by female inmates who are rehearsing for the upcoming “Prison in Concert”. Among those accompanying the Minister to the prisons were Member of Parliament John Adams, President of the St. Francis Community Developers, Alex Foster, Regional Executive Officer (ag) Claude Henry,