Minister within the Office of the Prime Minister, Hon. Kwame McCoy, this morning, met at his office with the representatives of the North Timehri Community Development Council (CDC), where a number of issues affecting the community were addressed.

The new CDC was formed in November 2020 and is led by Chairwoman, Mrs. Fanica Lewis.

Minister McCoy was able to resolve some of the issues on the spot, including concerns regarding the rehabilitation of the community centre ground, roads, ownership of land and accessing support from the Small Business Bureau for women-led businesses in the area.

In his remarks to the group, the Minister, who holds responsibility for Public Affairs, said that the Government is serious about citizens engagement and ensuring that the needs of every community across the country are addressed in an efficient way.

“We are here to serve you and serve your communities and therefore, it is our responsibility to listen to you and address whatever concerns you may have. In turn, I would ask that as the CDC, you play your part in the community you have been elected to serve. Engage your fellow residents, find out what are the issues facing them, build relationships with the businesses in your communities and let’s work together to make people’s lives better,” he encouraged.

Mrs. Lewis, in brief remarks following the meeting, said that since the establishment of the CDC, the Government, particularly Minister McCoy has been very supportive whenever he is called upon.

“I am very pleased with the meeting and everything we discussed. I must say that from meeting Minister McCoy in November, he has already had an outreach within the community and now he has met with us. He made some promises to us to help us with community development and indeed, he is greatly assisting. We understand that Rome wasn’t built in a day but because we know development is on its way, we are patient. In addition to that, the community centre ground was really something we wanted addressed and he has been successful in getting the letter from the Army to say it has been handed over to us. So, I have to say a big thank you,” she said.

The group, through the interventions of Minister McCoy, will have a series of follow up meetings with other Government agencies, including the Ministry of Labour, Ministry of Local Government and the Guyana Lands and Surveys Commission in the new week to iron out some of the concerns raised. 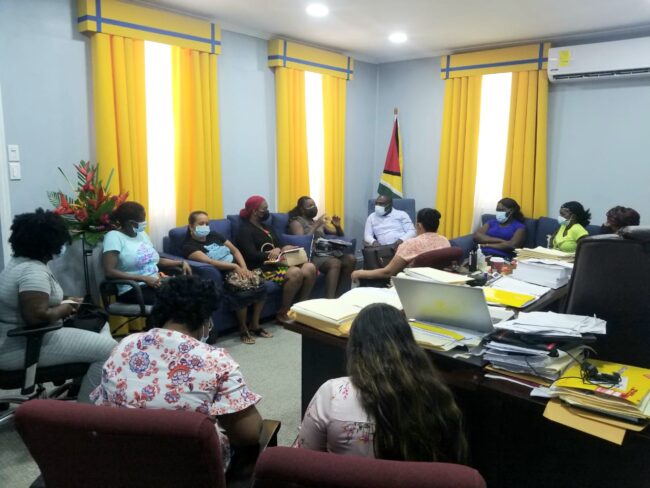