Parika has been recognised as a gateway to major communities that produce gold, timber and rice. Citizens residing in the Essequibo and Islands, Bartica and the Pomeroon-Supenaam region will now benefit from new eye care services located closer to them. 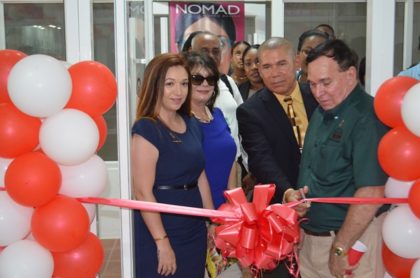 Minister of Public Health Dr. George Norton said that the brainchild behind the opening of the branch, Dr. Shannon Da Silva has been working with the Ministry of Public Health voluntarily, as part of medical outreach programmes across the country performing ophthalmology and optometry.

Minister Norton highlighted that visual impairment is preventable and therefore urged the Da Silva doctors to continue their pledged support towards  reaching out to all citizens countrywide, reducing the presence of visual diseases that would eventually cause blindness. 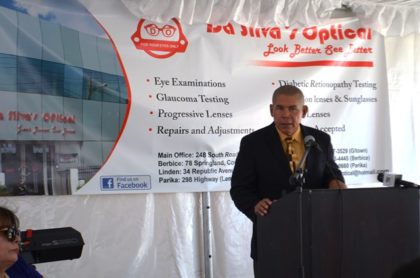 Minister of Public Health, Dr. George Norton giving the feature address at the opening ceremony of the branch of Da Silva’s optical, Parika

Minister Norton added that efforts must be made by regional authorities to see the rolling out of efficient healthcare.

Dr. Shannon Da Silva stated that she, along with her sister, always had a passion to follow in the footstep of their father Phillip; therefore they both are qualified optometrists, dedicating their lives to enhancing eye care for Guyanese. 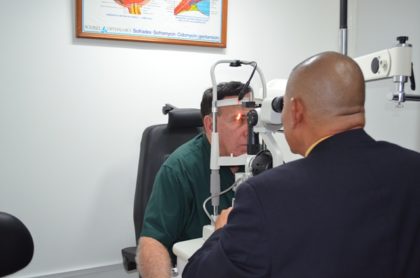 Services offered at the location include eye examinations, and testing for glaucoma and  diabetic retinopathy, and repairs and adjustments among other services. For a limited period the location is offering a 15 percent discount on required eyewear upon producing a coupon.

Dr. Shannon Da Silva reflected on the bedrock of Da Silva’s optical services which was started by her grandfather, José Da Silva, recipient of a Golden Arrow of Achievement, who dedicated his life towards providing quality eye care services. Da Silva teamed up with the Guyana Defence Force (GDF) and the United States Army to perform outreach programmes to remote areas in Guyana that could have only been accessible by helicopter.

Those gathering at the opening ceremony of the branch of Da Silva’s optical, Parika