Minister of State meets with President of Cricket West Indies

Georgetown, Guyana – (September 12, 2018) Minister of State, Mr. Joseph Harmon, today, received a courtesy call from President of Cricket West Indies (CWI), formerly the West Indies Cricket Board (WICB), Mr. Dave Cameron at the Ministry of the Presidency. He was accompanied by Secretary of the Guyana Cricket Board (GCB) and Director on the CWI, Mr. Anand Sanasie.

During the meeting, the two sides discussed the ongoing Caribbean Premier League (CPL), the development of cricket in the Caribbean, plans of the GCB, the selection of players and the procurement of an electronic screen for the Guyana National Stadium at Providence, East Bank Demerara. The upcoming International Cricket Council’s (ICC) Twenty20 Women’s Cricket Tournament, which would see Guyana hosting several matches, was also discussed.

Minister Harmon assured the visiting delegation that the Government of Guyana remains committed to the development of sport and will try as far as possible, to lend assistance where necessary. 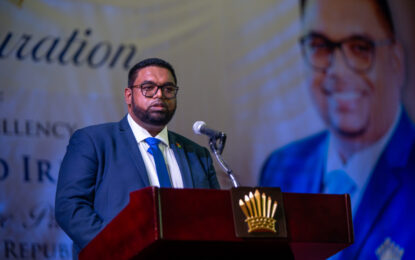 Ministers arrival at the Inauguration Ceremony

Scenes from the arrival of the 9th Executive...

Review of all leases, licenses, and permissions...