A section of the processing plant at Troy Resources, Karouni, Region 7

“It’s not an investigative visit, so we weren’t looking for findings. It’s a routine visit, checking to see how mining is progressing. Government is keen to ensure there is a good production, yet production that is done safely, and with respect for the workers,” Minister Trotman explained.

Minister Trotman said the parliamentary recess is being used by ministers of the coalition government to conduct outreaches.

“This is really a part of the ministry’s extension. Minister (Simona) Broomes was in another part of Region Seven over the weekend. Now that parliament is in recess, we are using the opportunity to reach out and move around. We recently were at Aurora Gold Mines. We are now here and will be going into the different mining districts within a few weeks… Lethem, Mahdia and so forth, just to see how things are going,” the minister said. 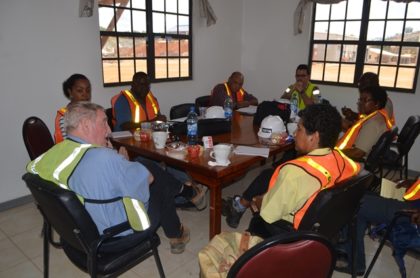 Minister of Natural Resources, Raphael Trotman and team at a round table discussion with CEO of Troy Resources, Ken Nilsson, at Karouni, Region 7

During the visit, the Minister discussed several issues of concern with Chief Executive Officer, Troy Resources, Ken Nilsson, among them the effects of rain on production, the industrial climate, illegal mining, services being provided to nearby communities by the company through its health care facilities, and government’s intention to have mining and other officials present at the camp on a rotational basis throughout the year.

The minister explained that the continuous presence of officials at the mine site will aid in better monitoring, and will provide learning opportunities for a much improved mining sector.

“Well government believes that for two reasons especially, we should provide greater oversight. You can’t oversee a camp several miles from the coast by staying on the coast. So it’s important that on a rotation basis, officers of Guyana Geology and Mines Commission, Environmental Protection Agency (EPA), Forestry, if it’s a forest operation and the Guyana Gold Board, sometimes, and even the Guyana Revenue Authority (GRA) just to be here to see what’s going on, but more importantly it is being able to learn (about the) best practices observed so that when we move on we can train people. We can say this is how it was done before by an internationally recognised company.”

Questioned about the time schedule for the new mode of operation, the Minister said, “… it is a multi-agency and multi-ministry initiative so I’ll have to complete discussions with the Ministry of Finance and the Ministry of the Presidency so we can have a facility to accommodate officers of the different agencies.”

Addressing the issue of production, Minister Trotman said, “about the production forecast, we are aware that rains affected production a few months ago and they are now getting back to a good momentum, so it’s important that we get a better understanding rather than sitting in office in Georgetown and (attempting to) do so.” 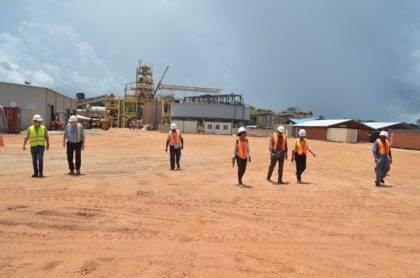 During discussions with workers at the mining camp some of the issues raised with Minister Trotman included health and remuneration.

Referring to the general industrial relations climate, Minister Trotman said, “Industrial relations are being handled by the Ministry of Social Protection, Department of Labour. We wouldn’t comment now about satisfaction, what we can say is that government wants every worker who wishes to have union representation be allowed to exercise that constitutional right. It is our job and duty to ensure that right is not in any way fettered or interfered with, so we are all in favour of unions coming in and being recognised and workers becoming better organised.

According to CEO Nillson, the Karouni Camp employs almost 400 persons directly and another 180 on a contractual basis. Of those employed at the camp, approximately 120 have signed up for union membership and discussions are continuing with a view to finalising all arrangements.

Troy Resources holds two main project areas in Guyana. Both were obtained through the acquisition of Azimuth Resources in July 2013. In May 2014 the company launched its US$77M Karouni Gold Project at the Omai Linden Stock Yard, promising almost 600 job opportunities for Guyanese.

Nilsson estimated that there will be a seven-year mine life for the project. At the time of the launching, annual average gold production was estimated to be  90,000 ounces.