As the sun set on Linden, Attorney General and Minister of Legal Affairs Basil Williams SC, set out to show the people of Amelia’s Ward that the government has their interest. As the residents piled into the Police Outpost Area to voice their concerns, the AG and along with Minister within the Ministry of the Presidency with responsibility for Youth Affairs, Simona Broomes and Minister within the Ministry of Agriculture, Valerie Adams-Yearwood listened attentively to the issues raised.

In his address to the gathering, AG Williams reminded of his long affiliation with Linden. He recalled the discrimination that Linden endured under the previous government and marvelled at the resilience of the residents.

Generally, the residents noted that their main concerns were related to the lack of land allocations, the need for roads to be repaired, construction of community recreational facilities among others.

Residents of Amelia’s Ward at the community meeting.

Specifically, a resident who has been living on a piece of land, undisrupted for nineteen (19) years, recently learned that someone else was given a twenty-one (21) year lease for the very same plot of land. After soliciting information surrounding the case, Minister Williams recommended that the resident hire a lawyer to pursue her legal claim to prescriptive rights to that land. The resident expressed her satisfaction with the response from the minister.

Generally, Minister Williams said that “there isn’t a community in Guyana that has not been touched by the government.” Notably, the three ministers in attendance all contended that government is working its best to satisfy the needs of Guyanese in all parts of the country. 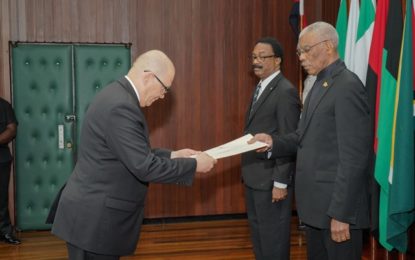