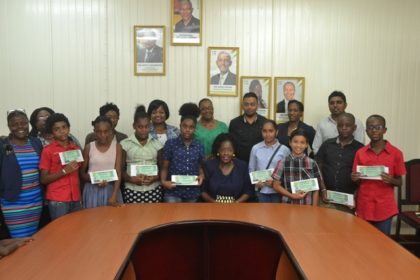 Minister within Ministry of Communities Valerie Adams-Patterson with the awardees and their parents.

Minister within Ministry of Communities Valerie Adam-Yearwood told Department of Public Information (DPI) she had wanted to present bursary awards to the ministry’s staff children last year, however no one who had a child sitting the NGSA, so her plans were placed on hold until this year.

The minister shared that after listening to the success stories of Daniel Robertson and Demetrius Drupe who attained placement at Queen’s College and others who lived in ‘depressed communities ’and were able to attain top schools, she took the decision to award them bursaries as well.

“After listening to the programme about the success of these two boys who are living in Albouystown, where people believe that nothing good can come out of such a community… I said that I had to do something for these two boys,” Minister Adams-Yearwood explained.

The minister congratulated the children for a job well done and encouraged them to continue to strive for excellence as they pursue their future.

Human Resources Manager of the Ministry of Communities Lavern Benfield- Sansculotte told the children that this gesture is a simple and kind act which she considers as a stepping stone to assist in the development of Guyana, since they are the future leaders.

DPI spoke to some of the awardees about their journey on attaining their schools.

Beyonce Roberts who attained 504 marks and will attend St Stanislaus College, said that she feels ecstatic about her placement and being rewarded by minister for it, noting that all of her hard work has paid off.

“I would like to give an advice to all the children who are preparing to write the National Grade Six Assessment (NGSA) next year and the years ahead that it does not matter where you come from because I born and grew in Albouystown and it has not changed me in anyway. So, I will like to say that it is not the area where you come from but it is the area that you take it,” Roberts added.

Daniel Robertson who attained 515 marks to attend Queen’s College said that he felt honoured to have received support from the Minister, noting that there is so much more in store for him to show.

“I have been through a lot to attain Queen’s College, I had to sacrifice playing with my technological devices, playing my friends and even give up doing my favourite activities but I feel much better now, knowing my results.”  He noted that though he sacrificed much to attain a placement at his dream school, he would not change anything.

Demetrius Drupe who attained 518 marks to attend Queen’s College said that close to the NGSA date, he placed emphasis on studying and, “had to give up my tablet, phone, computer and took extra studies and even lessons to achieve my goal”. He also drew up daily timetables to keep track of his studies.

The awards are valued $10,000 of which $5000 will be used for school uniforms and the remaining will purchase school supplies.

In support of encouraging students in pursing their academic development, the ministry will continue to distribute bursary awards in keeping the government’s agenda to ensure that all Guyanese are given an opportunity to attain education.