On Monday June 13, 2016, Minister within the Ministry of Natural Resources, Honourable Simona Broomes presented 5 fogging machines to Dr. Horace Cox, Director of Vector Control Services at the Ministry of Public Health. The donation was made by the Guyana Geology and Mines Commission (GGMC) through the Ministry of Natural Resources to help fight the deadly Zika virus. According to Commissioner of the GGMC Mr. Newell Dennison, the donation is in response to a call by Minister of Natural Resources Honourable Raphael Trotman to heads of Agencies to join forces and find ways to assist in the fight against Zika. He expressed his pleasure that the GGMC could offer some support and noted that the Agency has also been providing assistance through sensitization and mobilization in the mining districts from which it operates. Minister Broomes, while handing over the foggers which are valued at over one million dollars, reinforced the Commissioner’s sentiments and noted that it was a sign of the Ministry’s commitment to collaboration and partnership which speaks for the ministry as a whole. Dr. Cox, on receiving the donation, expressed his gratitude for the support offered by the GGMC and highlighted how valuable it will be in fighting Zika in outlying regions that currently do not have the capacity to do so. He was also thankful for the responsiveness of the Ministry and the GGMC to requests for support and was encouraged that this donation was a signal of future collaborations. The Ministry of Natural Resources remains committed to supporting efforts that safeguard the health and well being of all Guyanese and encourages all members of the public to play their role to ensure a healthy nation. 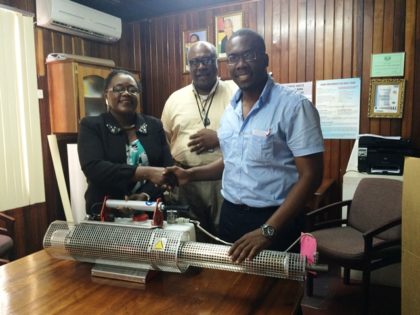