Mobile pumps for Georgetown by December

Georgetown will have three mobile pumps by December, just in time for the next rainy season.

In a recent interview with the Department of Public Information (DPI), Chief Executive Officer of the National Drainage and Irrigation Authority (NDIA), Frederick Flatts said the pumps are among a larger package being funded under an Indian government line of credit. “The whole package is US$4Million. That’s for the pumps. The mobile pumps will be used in Georgetown to help relieve flooding.” 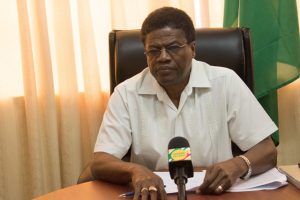 Further, Flatts said that the acquisition of the pumps is awaiting the go-ahead from the National Procurement and Tender Administration Board (NPTA), in keeping with the procurement legislation. “As soon as we have that approval we will go ahead and hire a supplier for the pumps.”

Since coming to office in May 2015, the current administration has implemented several major projects to clear and desilt drainage canals in and around Georgetown.

According to the Ministry of Communities’ website, in September 2017 the Mayor and City Council (M&CC) of Georgetown embarked on the cleaning and desilting of street drains, alleyways and canals. Areas targeted are Agricola, McDoom, Houston, Ruimveldt, Bourda, Lacytown, Le Repentir and South Cummingsburg, with more than $5Million allocated for the cleaning of avenues and verges in the later stages.”

The NDIA is an agency of the Ministry of Agriculture. Its main task is the management and maintenance of drainage and irrigation infrastructure across the county.