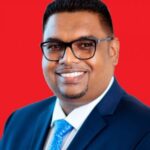 Lowenfield’s report shows the People’s Progressive Party accumulating some 233,336 votes while the APNU+AFC gaining 217, 920 votes. The joined list of ANUG, LJP and TNM have together gained 5,214 votes.

The vote will see the PPP being allocated 32 seats in the National Assembly and the APNU+AFC 30. The joined list will be allocated one seat.

The CEO in his report stated that in accordance with Article 177 (2) (b) of the Constitution, Order 60 of 2020 or the National Recount Order revealed that the numerical count of the ballots cast for each list of candidates does not reflect the “true will of the electors.”

“Notwithstanding the foregoing, with respect to your directive to provide a report according to Section 96 based on Certificates of Recount, the calculation of the seats of each candidate is summarised.”

With the declaration made, Justice Singh has written to Chancellor (ag) of the Judiciary Justice Yonette Cummings Edwards, requesting that she facilitates the swearing in of the new president.

A date for the swearing in is to be announced.