Public Security Minister, Khemraj Ramjattan joined up with Minister of Social Protection, Volda Lawrence and Minister within the Ministry of Natural Resources Simona Broomes this morning to lead a team of vibrant Trafficking In Persons (TIP) advocates on an awareness walk from the Promenade Gardens to Durban Park, Homestretch Avenue. 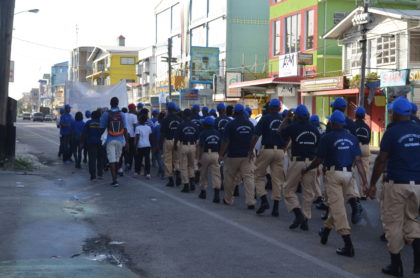 The walk dubbed “I give hope” is a part of an intensive public awareness campaign to inform people about TIP with the aim of ridding this scourge from society, and to help Guyana improve its listing on the US State Department TIP annual report. Today is also designated World TIP Day 2016.

United States of America (USA), Ambassador to Guyana, Perry Holloway during his remarks this morning said that Guyana has recently been taken off the TIP watch list.  He explained that the country was at a point where it was seen as non-cooperative in the fight against human trafficking.

Ambassador Holloway lauded the country’s efforts to end this scourge and pledged the support of the US government in this regard.  The Ambassador noted that the US is ready to work with Guyana on “developing an action plan to assist the NGOs (Non-governmental Organisations) that support victims.”

Meanwhile, Ramjattan stressed that more emphasis will be placed on the implementation of TIP legislation in the country. He noted that many times people are afraid to speak out, “they sometimes are afraid, or feel that the police will not do their job, this will change,” he said. 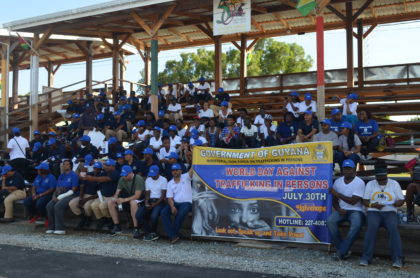 The Minister further added that while citizens have a role to play it is important to note that dysfunctional families also contribute to TIP. He pointed out that some families who are financially unstable contribute to this by saying “go out and bring some money,” a statement which often land their children in the hands of cruel people.

Ramjattan, who also heads the TIP Ministerial Task Force, pleaded with the Community Policing Groups (CPGs), which represent the largest portion of the gathering at today’s event, to continue to look for such victims and to educate their community members about this hideous crime.

Minister Lawrence emphasised on government’s quest to stamp out TIP. She added “your presence here today, convinces me that we will win the fight! We are determined to stamp TIP out!” she asserted.

The Social Protection Minister also noted that the First Lady, Sandra Granger recently held a dinner and movie for victims in state care. Minister Lawrence said that it is government’s aim to ensure that these individuals, their “beautiful faces continue to light up with laughter.” 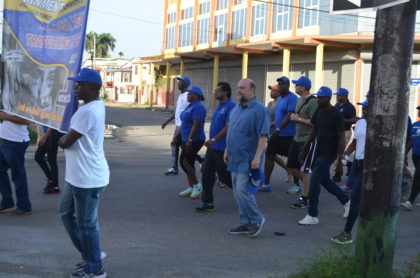 The TIP task force is expected to release a TIP action plan within the next month.

Minister Ramjattan led a team from his ministry on an awareness walk around the Bourda Market area on July 28.

A press release from the United Nations’ (UN) Office on Drugs and Crime, Executive Director, Yury Fedotov, stated that “Human trafficking is a parasitic crime that feeds on vulnerability, thrives in times of uncertainty and profits from inaction.  While the international community struggles with what UN Secretary-General Ban Ki-moon has called the biggest refugee and migration crisis since World War Two, human traffickers and migrant smugglers are taking advantage of misery to turn a profit.

Criminals prey on people in need and without support, and they see migrants, especially children, as easy targets for exploitation, violence and abuse. Armed conflicts and humanitarian crises expose those caught in the crossfire to increased risk of being trafficked for sexual exploitation, forced labour, organ removal, servitude and other forms of exploitation.” 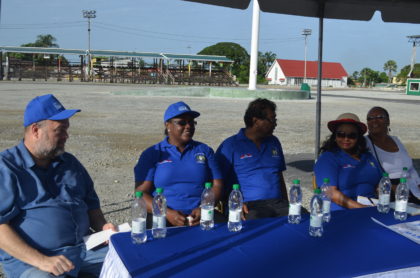 United States of America’s, Ambassador to Guyana, Perry Holloway, Minister within the Ministry of Natural Resources and the Environment, Simona Broomes and Public Security Minister, Khemraj Ramjattan along with Minister of Social Protection, Volda Lawrence at the Ministry of Public Security’s World Day Against Trafficking in Persons walk formal closing ceremony

It further read, “I call on governments to ratify and effectively implement the UN Convention against Transnational Organised Crime and its Protocols on trafficking and migrant smuggling, to assist and protect victims and the rights of smuggled migrants, and promote the international cooperation needed to bring criminals to justice. By strengthening action under the Protocols, we can reinforce protection for vulnerable children, women, and men, and help promote the safety and dignity of refugees and migrants at all stages of their journey. On this World Day against Trafficking in Persons, let us pledge to work together to give victims, as well as the many children, women, and men on the move, who remain far too vulnerable to trafficking, a much-needed voice and a helping hand.”

World Day against Trafficking in Persons was proclaimed by the United Nations General Assembly, and is termed “a serious crime and a grave violation of human rights.”