(Georgetown, June 20, 2016) – In an effort to upgrade the inventory of musical instruments at the National School of music and to afford students access to a high quality of instruments the Government of Guyana, in 2015, took a decision to purchase two Steinway Pianos. These two pianos have arrived in Guyana, and were presented to the Minister within the Ministry of Education, Hon. Nicolette Henry today. 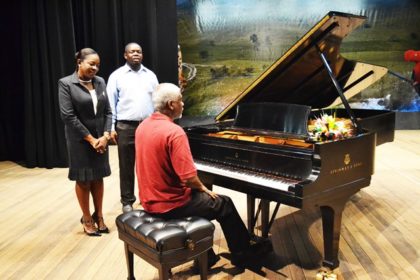 In her remarks, the Minister within the Ministry of Education, Hon. Nicolette Henry recognised that while the presentation ceremony is simple it is symbolic. “This is in keeping with President Granger’s vision of ensuring that Guyana becomes a land of many opportunities,” she said.

While reminiscing on her first days on the job as a Minister of Government, Minister Henry noted that the Ministry did not have a functioning concert piano. “This was a serious shortcoming on the part of the Ministry,” she highlighted. The Minister pointed out that once she understood the absence of any tool or equipment that is needed to get work done she worked towards ensuring that those items were provided.

The existence of these pianos in Guyana will allow music students to access classical piano music in their homeland instead of travelling overseas for such. These efforts are a part of the Government’s vision to ensure all Guyanese live a good life. 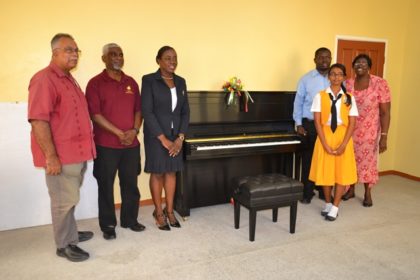 Minister Henry urged that the pianos be well cared for and their use maximised.

The Steinway grand is considered as ‘the gold standard’ of musical instruments, representing over 160 years of dedication to craftsmanship and uncompromised expression. Each Steinway piano, consisting of more than 12,000 individual parts, has its own musical character and is as unique as the individual who plays it. The Steinway is positioned as the piano by which all others are judged.

Administrator of the National School of Music, Andrew Tyndall noted that in 2009 Dr. Ray Lonke, the world renowned Guyanese pianist and educator, hosted a piano pedagogy for advanced classical piano students and music teachers. He had also agreed to give a free piano recital to the general public at the end of each workshop however the poor quality of the piano at the National Cultural Centre and the unavailability of an upright piano owned by the government forced Dr. Lonke to discontinue the series of workshops. He then relocated to St. Lucia. This now meant that Guyanese students were required to pay an additional cost to attend these valuable sessions in St. Lucia. 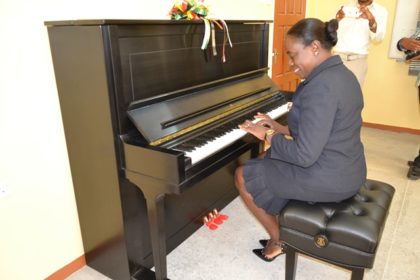 Mr. Tyndall emphasised that the existence of the new piano will allow for the resuscitation of the piano master class sessions. He added that the pianos arrived at the right time because the music school in now in the position to become the examination centre for the Associated Board of the Royal Schools of Music practical examinations. It will also allow for the reintroduction of the Ray Lonke Piano Pedagogy Master Class Workshops.

The existence of these two instruments will definitely improve the quality of music education delivered in Guyana as the government seeks to reintroduce music as a mainstream subject within the education sector.