His Excellency President David Granger has received the letters of credence from the Namibian High Commissioner to Guyana H.E Neville Gertze.

In brief remarks, on Wednesday, the Head of State noted that Guyana and Namibia had enjoyed cordial relations since the establishment of diplomatic ties on November 13, 1994. 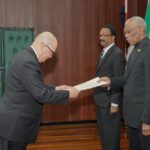 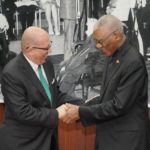 “Our countries adhere to the principles of mutual respect for each other’s territorial integrity and sovereignty, mutual non-interference in each other’s internal affairs, cooperation for mutual benefit, and the maintenance of regional peace and security,” the Guyanese leader said.

He added that the relations between the two countries were evident in their collaboration within the Non-Aligned Movement and the Commonwealth and along with Guyana’s support for Namibia’s independence during the struggle for the liberation of Southern Africa.

The Head of State also noted the current climate crisis in the African territory.

He added that with Guyana on the verge of becoming a “Green State”, the two nations “as developing states, can explore avenues for the strengthening of cooperation in areas of education, the economy and the environment.”

“I underscore our commitment to reinvigorate our relations and work towards complete results for our mutual benefit,” he said.

The Namibian envoy also congratulated Guyana on its recent appointment as Chair of the Group of 77 and pledged his country’s support during its tenure.