Nappi- charting a path to a brighter future

A DPI Feature by Synieka Thorne

Karu’ku and Nan’pi were  the names of two men, that escaped tribal wars in Brazil, and entered the then Guiana some 100 years ago. They were among the first settlers who entered  the forest, leaving forever their mark on the expansive savannahs of the Rupununi in Region Nine.

Karu’ku became Kanuku, bequeathing his name to the majestic range of mountains that divides the Rupununi savannahs in two. Nan’pi became Nappi, his name was given to the beautiful  Macushi Indigenous community sitting in the hills just outside the shadow of the Kanuku mountains, in Central Rupununi, Region Nine. 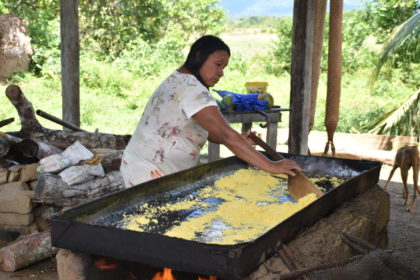 One of the resident preparing farine 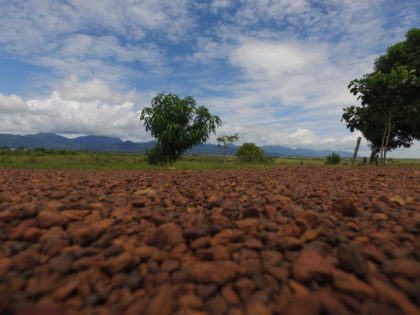 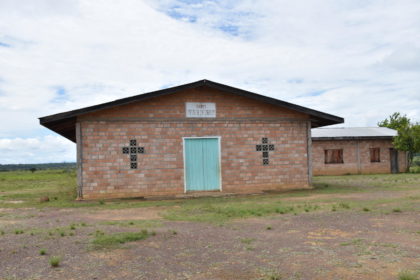 A church in the village 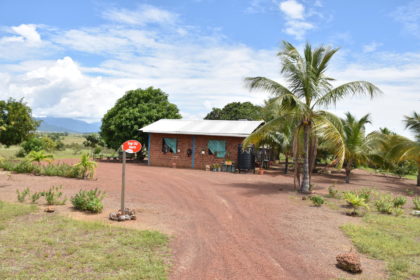 One of the clay brick homes in Nappi 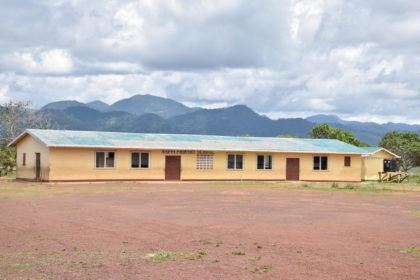 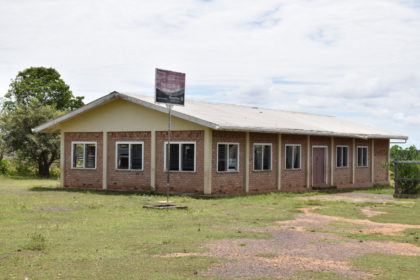 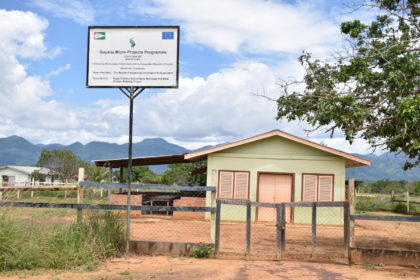 Nappi’s beauty is evident upon entering the community, through the 30 miles long road off the Lethem roadway. The road  is lined with trees that the village’s close to 1000 population use for medicine The landscape is uniquely dotted with termites homes.These beautiful structures, some almost 10 meters high, take all shapes and sizes, some even looking like statues. The termite homes take years to build and is as hard as cement, making them difficult to destroy.

Nappi is very quiet, while the homes are scattered and far from each other, the people are close knit and live in peace, making their traditional food of farine, cassava bread or casreep. Some still use bullock carts with wooden wheels, and the warishi, as well as believing in the Kanaima.( Kanaima are avenging spirits or humans possessed by said spirits in the folklore of the native tribes of Guyana and in Northwestern Brazil).

Nappi also has a nursery and primary school and a hot meal kitchen, a health centre, Village Office, a community centre and a rest house.

There is no shortage of attractions in the community itself. Up and down hill are lined with citrus and mango trees.

Nappi has great potential for tourism. The community has two Falls; the Nappi and Jordan Falls.

The Jordan Falls, which is more accessible, has an Eco-Lodge, which accommodates the few tourists yearly that visit and experience the excellent hospitality of the people, unspoiled nature, rich wildlife, a dizzying array of birds, and the rarely-visited Jordan Falls. 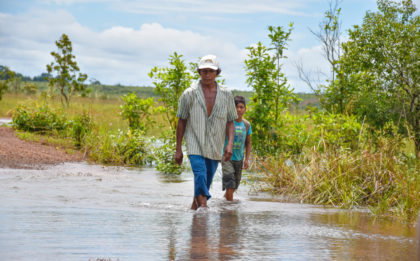 A father and son heading to check on their fish traps 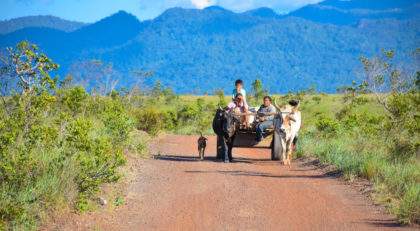 A family returning from the farm lands with a bullcart

Those who prefer to stay closer to the lodge can explore the nearby bat cave, hiking trails or take a dip in the stream that runs along the lodge border.

In the past Nappi was known mainly to visitors as being the source of intricate balata crafts. Balata is a rubber-like substance harvested from trees to make traditional sculpture.

Today, Nappi’s main economic activity is farming, with some traditional hunting and fishing.

Through its Community Development Project (CDP) Nappi is establishing a $5m cattle ranch.  Toshao Walter Henrico, said that the first phase of the project is completed and the second phase will commence soon.

“We are looking to sell beef to Lethem, Georgetown and the other villages. We want to get into producing leather and milk once the project starts to kick-off,” Toshao Henrico explained.

“We want to establish a coconut farm so that when tourist come in, we have coconut to offer them, we are looking at having a beach, sports, canoe race , speed boat, jet boat,” Toshao Henrico said.

The community also plans to establish a uniformed housing area equipped with a solar farm, internet hub, guest house and other amenities. “ Many people want to put their homes where they want to and so they are scattered all over the place. We want to be more uniform and so we will be engaging the surveyors and survey the place and come up with a model for the houses,” the Toshao explained. 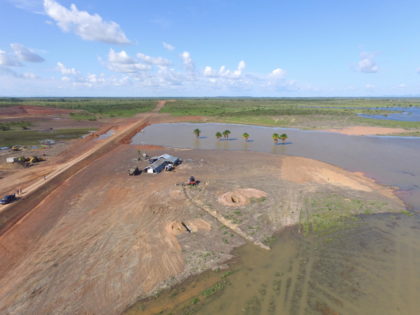 The intention is to develop programmes for the youths and create jobs so that they will stay in the community and contribute to its development.

The community is also in the process of constructing a community Benab from the $1M they received as part of their 2016 presidential grant project from the Ministry of Indigenous Peoples’ Affairs. For 2017, the community proposed to purchase a motorcycle, printers and computers for the Village Office.

Another major project is the community’s water catchment project, which is expected to be completed soon. The Public-Private Partnership project began earlier this year to bring relief to the communities  during the dry season.

The catchment area identified is a natural depression in the land in a section not utilised by the community for either farming or cattle rearing. The area will hold approximately three cubic meters of water.

The catchment area, although not fully completed, has accumulated water from the heavy May/June rains. Toshao Henrico said this will bring relief to the villagers who farm and raise animals for their livelihoods.