A National Task Force aimed at bolstering evidence-driven crime prevention under the scope of the CariSECURE project, was today launched at the Guyana Marriot Hotel. 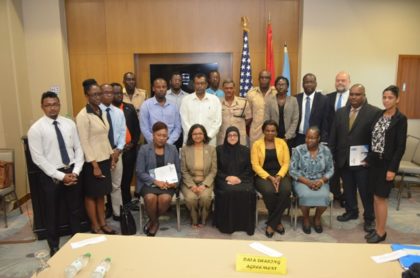 Khemraj Ramjattan, Minister of Public Security (sixth from left) along with other members of the newly established CariSecure Task Force and their support staff at the Marriot Hotel on Wednesday.

The task force is a collaboration between the United States Agency for International Development (USAID), the United Nations Development Programme (UNDP)and the Ministry of Public Security. It is now responsible for managing the implementation of the Caribbean Citizen Security toolkit in Guyana.

Minister of Public Security Khemraj Ramjattan said with the information provided, trained personnel will analyse data which will later see some evidence-based policymaking.

“This task force is going to ensure the implementation of the project activities, which includes collecting data from all across the country, police stations, educational establishments, where there may be violence to students all being collected into one central observation.”

Also speaking at the launching was United States (US) Ambassador to Guyana Perry Holloway. He said the toolkit implementation represents an in-depth collaboration between the entities involved.

“The United States Government is proud to continue its long history in supporting the government of Guyana in areas of citizen security and youth empowerment. We are pleased with the gains made under the CariSecure initiative to date which is part of the USAID’S wider Youth Empowerment Services (YES).” 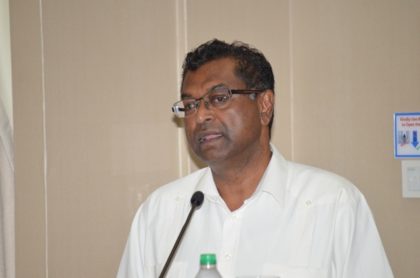 The goal of the CariSECURE project, according to USAID, is to improve youth crime and violence policy making and program development in 10 eastern and southern Caribbean through the use of quality, comparable and reliable national citizen security information.

In adopting this approach, the Project which costs some US $14,000,000, will first work with technical personnel in public institutions to standardise and disaggregate citizens security data across the region. CariSECURE will then build the analytical capacity of public institutions to use such data to identify and measure youth crime and violence trends and resilience factors, draw conclusions on the actual state of citizen security in each country, and identify possible interventions. The Project will also promote a culture of evidence-based policy-making and program development in national institutions, which focuses on addressing the root causes of youth involvement in violence and crime.

Along with Guyana, project activities will be implemented in Antigua and Barbuda, Barbados, the Commonwealth of Dominica, Grenada, Saint Kitts and Nevis, Saint Lucia, Saint Vincent and the Grenadines, the Republic of Suriname, and the Republic of Trinidad and Tobago.