Georgetown, Guyana – (July 1, 2016) President David Granger has once again reiterated his call for National songs to be placed in schools and encouraged in the home and church as he noted that such songs are a symbol of nationhood and are critical to the enhancement of a country’s national consciousness and identity.

The President made these remarks at the launch of the Victoria Regia Quartet’s, formerly the Circle of Love, National Songs of Guyana collection, which was held last evening at the Pegasus Hotel. 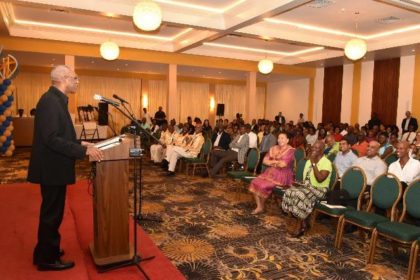 The President said that these Nationals songs must be preserved if Guyana is to succeed in its efforts to build a cohesive society, which stands ready to defend the national patrimony.

“Rebellion and resistance were common historical experiences, which are venerated in our national songs.  They remind us of the price that our fore parents paid for the right to be masters of our own destiny and the price that our generation has to pay to protect our nation.  Cleveland Hamilton’s Song of the Republic,arguably one of our most militant national songs, is a call to arms… The defence of our motherland is a sacred duty.  The success of any defence depends, however, on national unity and social cohesion.  A divided nation is a weak nation,” the Head of State said.

The country’s National Anthem, the President said, should serve to remind all Guyanese that “we are a multicultural society in which people of different races co-exist.  The diversity of our society must not, however, be viewed as a handicap. Guyana is enriched by its cultural diversity… Citizens suspend, if not forget, differences of culture and class during the recital of our national songs.  Citizens come together, setting aside differences that have traditionally divided our people.”

President Granger added that with social cohesion, comes a sense of nationalism, which is important to the development of the country as a whole. 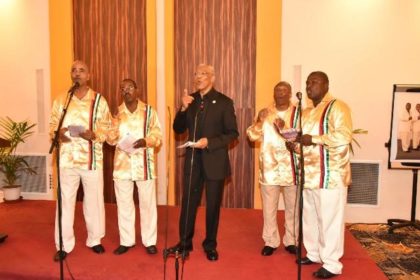 President Granger surprised the audience with a performance with the Victoria Region Quartet, formerly known as the Circle of Love

“National songs help to create that uniqueness by fostering a distinct national consciousness. National songs are an inalienable part of our patrimony.  They shape our national consciousness.  They define who we are. They remind us of our common experiences as a nation, reinforce our pride by depicting our country favorably, re-affirm our shared values and aspirations and recommit us to the duty to defend our motherland,” the President said.

These precious songs, he said, must not be allowed to become victims of neglect and the teaching of the national songs in our schools and places of worship must be sustained.

Speaking from a historical note, the President outlined that Guyana’s national songs have their origin in the Centenary celebration of unification in 1931. British Guiana was formed from the three Dutch colonies of Demerara-Essequibo and Berbice – names that became the titles of the ‘counties’ before districts and regions were created.This Centenary, he said, was a major cultural festival. It witnessed, among other events, the first public singing of the Song of Guyana’s Children, composed by Rev. Hawley-Bryant, a minister of the Congregational Church.

“The cultural movement, which was accompanied by the composition of national songs was a glorious historical process. It received a boost with the establishment of the British Guiana Music Teachers’ Association by Lynette Dolphin and others in 1948. This was followed by the conduct of the first Schools ‘Music Festival in 1952. Robert (RCG) Potter’s lyrical My Guyana El Dorado was composed in that year… Our national songs, for the most part, therefore, are associated with Guyana’s growing self-awareness, its struggle for Independence and freedom from colonial rule. Valerie Rodway’s Guyana the Free celebrates the joy of freedom,” he said. 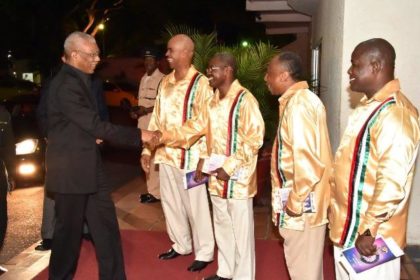 His Excellency, President David Granger is welcomed to the event by the quartets, upon his arrival at the venue, last evening

Meanwhile, Chairperson of the event, Ms. Cheryl Sampson, in giving a historical review of the group, highlighted that it was the President, while in Opposition, who had set the idea in motion for the compact disc when he had asked the group to perform National songs at an event instead of traditional Guyanese folk songs. The members of the group, she said, grabbed the inspiration from the President and endeavored to make this a reality.

She noted that even since his assumption to office, the President has been trying and is succeeding in his quest to renew sense of patriotism in Guyanese through the national symbols, including the national songs.

“By the time Brigadier David Granger took the oath to office last year, national songs became music to the ears once again,” she said.

Leader of the group, Mr. Fenton Park, said that after the suggestion had been made, two days later, he received a copy of a book which contained all of the country’s national songs, courtesy of the then Opposition Leader. From thereon, the quartet never looked back.

The group intends to work with the Ministry of Education to put copies of the compact disc in the schools across the country.