Georgetown, Guyana – (October 20, 2017) Director of Sport, Mr. Christopher Jones, today, declared open the 2nd Special Schools Athletic Sports, which was hosted by the Department of Culture, Youth and Sport, which falls within the purview of the Ministry of Social Cohesion, in collaboration with the National Sports Commission (NSC). Students from ten special needs schools, including from New Amsterdam and Linden, participated in the event, which was held at the Guyana Defence Force sports Ground at Camp Ayangana. 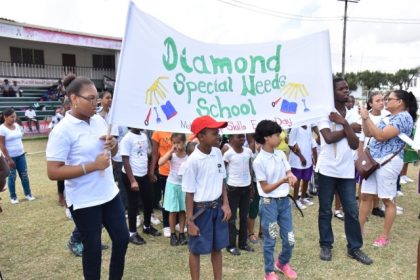 Students from the Diamond Special Needs School prepare to march.

Mr.  Jones said that he was pleased to be a part of the initiative and he was proud that the Department of Sport was able to make good on its commitment to host the event for the second consecutive year. “We mentioned last year, that it was the first time in Guyana’s history that a special needs school sports was [held] and the commitment we made to you last year is that it would not be the first or the last year, and as testimony to that, here we are again today … We make a commitment to you here today that the special needs sports will extend and go even further,” Mr. Jones said.

Mr. Jones also said that the NSC plans to expand the roster of activities to include bocce (a ball sport) and swimming competitions in next year’s events.  In this vein, the NSC is in the process of acquiring the necessary equipment for the first game.

Last year, 154 children from 10 schools participated in 46 events. This year’s programme has seen a 60% increase in participation. This annual event aims to encourage wide participation by persons with disabilities in sports, with the view of honing the potential of para-athletes to compete in the 2019 World Summer Special Olympics to be held in Abu Dhabi, United Arab Emirates. 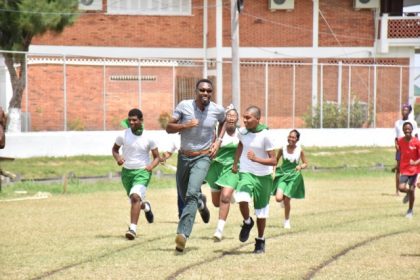 Director of Sports, Mr. Christopher Jones takes the lead as he sprints ahead of students from the Ministry of Education’s Unit for the Blind at the opening race of the 2nd special Schools Athletic Sports.

The National Sports Commission (NSC) saw the need for the National Paralympics to become more involved in sports, as such, through Sports Organiser, Mr. Wilton Spencer, it planned and funded the event to generate opportunities for special needs students.

The athletes were all excited to compete in the events. In an invited comment, Master Seon Mitchell, a student athlete from the Wismar Visually Impaired Unit, said that he came to have fun and enjoy the day. “I came to take this away today and I’m so excited to compete because I know we from Linden always perform and take home the tittle,” he said.

Similar sentiments were expressed by Master Anston Forde, a student of the St. Barnabas Special School.    “I will be running relay [and] 200 metre,” he said.

The students are competing for a line of medals as the focus is on individual athletes. As the event develops, focus will be placed on both athletes and schools and trophies will be introduced. 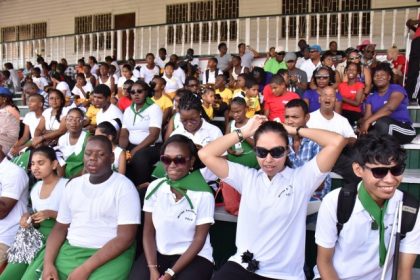 Parents, teachers and other supporters turned out in their numbers to cheer on the athletes participating in the 2nd Annual Special School Athletic Sports, which was held at the GDF sports ground, Camp Ayangana. 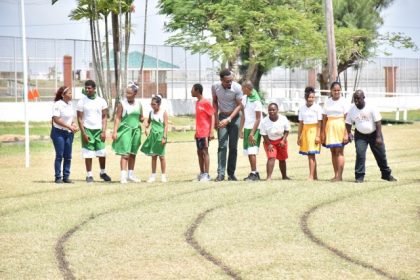 Director of Sports, Mr. Christopher Jones and this student from the Ministry of Education’s Unit for the Blind discuss the logistics of the first race to open the event, as the other students from the St. Barnabas Special School and the Harold B. Davis Special School get set.