The National Task Force Commission (NTFC) established on August 12, 2015, has faced major challenges in its one year in existence, nevertheless, it is progressing, its Chairman, Major General (retd), Joseph Singh said.

Singh, addressing the media today, on the NTFC’s plans for areas of national development at the Ministry of Public Infrastructure (MPI), in the presence of Secretariat head, Dr. Sewnauth Punalall, alluded to the assistance sought from the Netherlands’ Dutch Risk Reduction, (DRR)-Team to address drainage and irrigation.

He explained that drainage and irrigation is a major challenge for the NTFC and the National Drainage and Irrigation Authority (NDIA), however, the “NTFC has played a pivotal role in this initiative.” 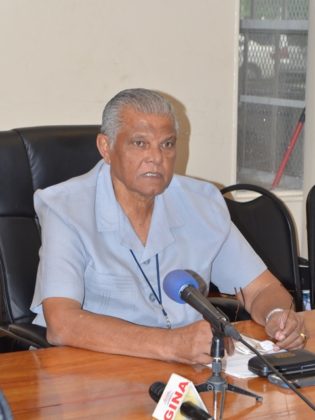 Chairman, of the National Task Force Commission, Major General (retd), Joseph Singh updating the media on the commission’s one year in office

Further Singh explained that drainage and irrigation work was carried out in West Watooka, Linden. He said that this was due to farming on ‘forgotten lands’, “The farmers who left their farm lands and entered mining then returned into farming after neglecting their lands for years. As a result, clearing of canals and drains and restoration of farm lands are ongoing in the community by the NDIA, MPI and the farmers.”

Additionally, severe flooding in Linden and West Bank Demerara is a challenge for the NTFC. Singh pointed out that water from the hills was entering the Linden residents’ yards compromising foundations and agriculture. After investigation by technical persons, it was discovered that soakaways (a pit, typically filled with hard core, into which waste water is piped so that it drains slowly out into the surrounding soil) that were established many years ago, were heavily silted and covered.

This prompted immediate action by the NTFC in collaboration with the NDIA to clear and desilt most of the soakaways in the community.

Improper garbage disposal in Khan’s Hill, Mabaruma, Region One and water pollution are among other challenges faced by the NTFC. Singh noted that despite the challenges, the commission has made significant strides in its one year.

In Region Four, the NTFC, in collaboration with the NDIA, has successfully cleared the Little Diamond outfall; operationalise the Hope Relief drainage channel, and stabilised Crown Dam and Conservancy Dam among other successes. The Trafalgar outfall in Region Five was also cleared while Trafalgar and Golden Grove benefitted from additional water pumps.

The NTFC in collaboration with the NDIA is working with the Region Six authorities to address drainage in the region. Work is ongoing in Region 10 to address the concrete soakaways and repairs drainage facilities there, Singh explained.

Ongoing road works will continue in the hinterland and along the coast and “we hope to get great assistance to deal with the homeless, mentally challenged and the addicted,” the NTFC Chairman stated.

The NTFC was established by Cabinet to address national drainage, national solid waste management, national traffic management, sustainable countrywide renewal and welfare management of the homeless, the mentally challenged and the addicted.

While there are respective sectors with responsibilities for these areas of concern, the NTFC was seen as a mechanism to facilitate partnerships. “We are not replacing the established agencies, and we don’t have a separate budget because we are not an executing agency, we are a facilitating mechanism,” Singh explained.