The National Toshaos Council (NTC) is a semi-autonomous body comprising all Toshaos in Guyana. It has an executive committee including one Toshao from each of the ten administrative regions. This body is responsible for promoting good governance in the villages; preparing strategies and plans for protection, conservation and sustainable management of village lands and natural resources; and for reducing poverty and improving access to health and education and other critical services. 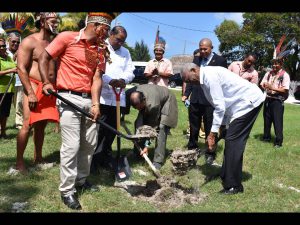 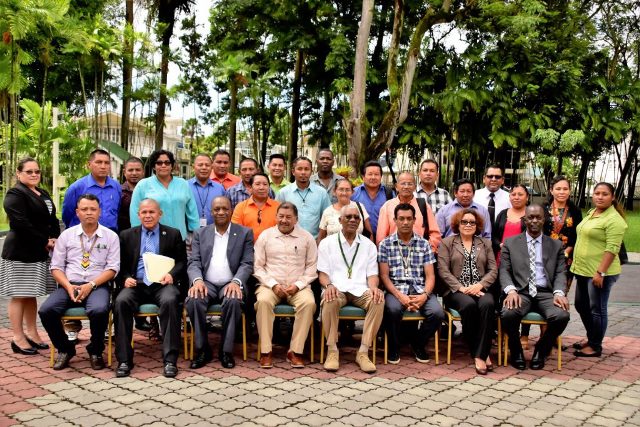 The Executive of the National Toshaos Council (NTC) with His Excellency, President David Granger and ministers of government. 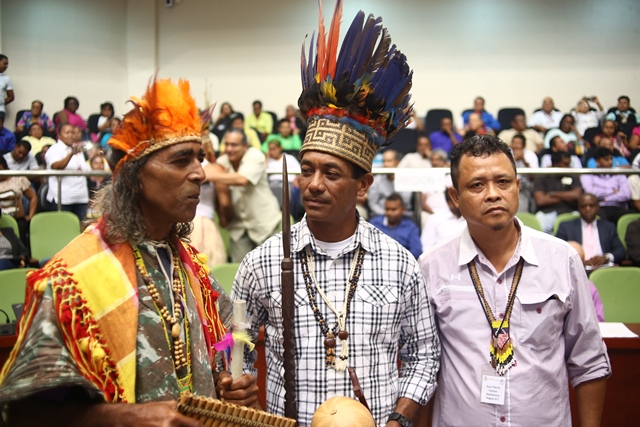 Chairman of the NTC, Toshao Nicholas Fredericks and Vicechair, Toshao Paul Pierre being blessed by an elder following the election. 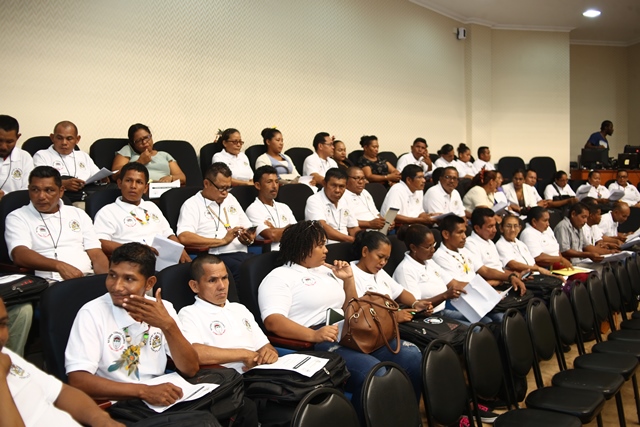 That particular election was deemed historic as there were major changes in the composition of the body of the executive. For the first time, five women sit on the council – Sharmain Rambajue and Elizabeth Ramacindo, Region 1; Beverly Clenkian, Region 4; Marbel Thomas, Region 8 and Loretta Fiedtkou, Region 10. Further, of the 20 Toshaos nominated, only three would have served on the previous council during the period 2015-2018.

According to Ministerial Advisor to the Ministry of Indigenous Peoples’ Affairs and Member of Parliament (MP), Mervyn Williams the NTC has witnessed improved leadership under its new executive body led by Toshao Fredericks. He said transparency and accountability have been the body’s hallmark over the past year, something that was missing in the last council.

During an interview with the Department of Public Information (DPI), Williams said there was a perceptible effort to pull together district councils – the legal body that represents Indigenous Peoples within a particular district. Currently, there is one legally gazetted district council in the South Rupununi, Region 9, also led by the NTC chairman. Plans are on stream to gazette the Moruca District Council, Region 1, Upper Mazaruni, Region 7 and the North Pakaraima, Region 8, Williams revealed.

This move by the current council, Williams added, aims to better organise the leadership with the sub-regions, so that leaders can speak with ‘one voice’ on a particular issue. He said it is already reaping benefits and noted that during the national consultations held on the revisions of the Amerindian Act of 2006, leaders were in accord with recommendations put forward. “The leaders consolidating their position on a specific matter. This means that there is far more meaningful use of time… This new NTC is moving in the right direction. It is now taking up that role that His Excellency, President David Granger suggested. The leadership at all levels are using this opportunity to bring their issues to the table and seek solutions by providing recommendations.”

Over the last three years, the government has increased the subvention given to NTC by 67%. Previously, the body received $12M in 2015; this was increased to $16M in 2017 and 2018 respectively, and $20M in 2019. The funds are to assist the body to carry out its annual work programme.

Government has fulfilled its commitment to ensuring that the NTC has a place to conduct its work in Georgetown. Moreover, President Granger handed over the lease for the land, earmarked for the council, to construct its Secretariat. Further, the president committed to identifying a larger plot of land for the establishment of a complex that will include dormitories to accommodate Toshaos, conference rooms and other facilities.

Each year, the NTC organises a national conference that brings together the leaders of the over 212 Indigenous villages in all of the 10 Administrative Regions. The conference is an important forum that allows village leaders to have engagements with the president and government ministers, and officials from various government agencies. It is aimed at consolidating and expanding the national development and transformation processes to cater to the needs of Indigenous people. It also addresses issues such as land titles and demarcations, education, health, social services, security and infrastructure.

This year’s conference will officially open on Monday, October 7 and runs until Friday, October 11 at the Arthur Chung Conference Centre (ACCC), Liliendaal. The event is coordinated and hosted by the NTC, with support from the government, through the Indigenous Peoples’ Affairs Ministry.